With each passing hour, as I scrutinize the scanned images found in the Barry-Hayes Papers–Series 58 Ships’ Papers, and begin to build a ‘metadata catalog’ by identifying and labeling each slip of paper, a picture emerges of early 19th merchant ship owners contracting, with a variety of merchants, to load cargo and to sail between the ports of Philadelphia and a foreign destination, in this case, Havana, Cuba. The Ship’s Papers series is a voluminous collection comprised of ‘bill of lading,’ accounts and receipts for specific schooner, sloop, ship or brig all related, in one way or another, to Patrick Hayes who was a ship owner and, on many occasions the Captain, aka ‘Master,’ of the ship. These business transactions provide us, in one sense, with a 19th century ‘paper trail’ into the rich history of commodities, either exported or imported, through the port of Philadelphia. 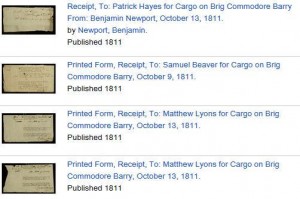 Receipts for cargo destined for Havana, Cuba, on the Brig Commodore Barry in 1811. 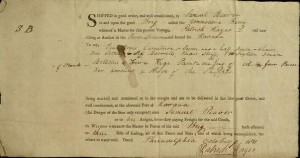 In October of 1811, the Brig Commodore Barry, anchored in Philadelphia, and destined for Havana, Cuba, clearly illustrate the types of consigned merchandise that filled the ship’s cargo hold, and transported in all kinds of containers like kegs, barrels, jugs and boxes, all transacted over a few short days, between the 9th and 13th of the month. We can see Patrick Hayes, the assigned Master for the voyage, affixed his signature in receipt for merchandise. I successfully confirmed, on this occasion, each merchant’s name and trade by reviewing several city directories, from 1801 and 1813, like The Philadelphia Directory and Register, 1813, for Samuel Beaver whose entry read, “Beaver Samuel, cabinetmaker 155 n. Front,” and comparing the receipt, which read in part, “Ten boxes of furniture, seven and a half boxes chairs. . .” The other merchants’ items and their trade, were confirmed through review of directories from various years, like a cart, from a wheelwright merchant, Benjamin Newport, as well as a box of saddles from Matthew Lyons, Blacksmith, confirmed in The Philadelphia Directory, 1801.

This is just one instance from all the many voyages by Hayes, on the Brig Commodore Barry as well as all the other ships’ papers found in this collection. Every ‘connected dot’ I make, when confirming a person and his trade with an historical account, brings to life, once again, the steps taken by a merchant, a ship owner and its master to recreate that one voyage from the many transactions, bound to Havana, and realize it all took place over 200 years ago. The Villanova Digital Library’s many collections offer like experiences from its myriad of individuals and events that transcend the digital image to create a window to view history in a new light.