Several years ago a colleague offered to show me, an art historian, “a wonderful painting” housed in Falvey Hall. I had never visited the space known as the Old Falvey reading room, but hiking up a dark, narrow flight of steps and through a locked door brought us to  a vast high-ceilinged space filled with utilitarian metal shelves holding the library’s media collection. My guide led me a short distance along the inside wall and proudly pointed to the artwork.

The painting had an impressive size (approximately 12 by 19 feet), but what a disappointment! Hung far above eye level, dark, discolored, damaged and with barely visible contents, this was certainly not the painting I had expected. A placard showed the artist’s name, the painting’s name and the donors’ names: “‘David and Goliath’ by Pietro Berretini de Cortona, 1596 -1669, … Gift of Prince and Princess Alexis Droutzkoy, 1950.” I never suspected I was destined to share the room with that painting, a painting that to my art historian’s eyes appeared to be hopelessly damaged and not worth displaying. 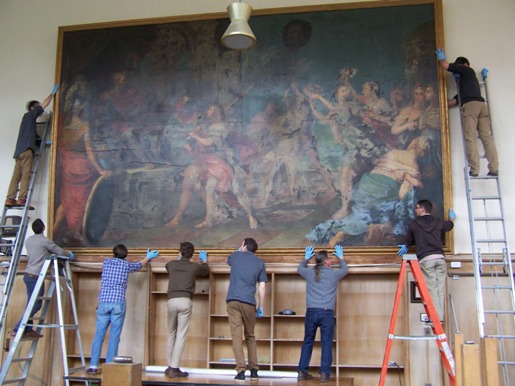 I forgot about “David and Goliath” until library renovations began in 2011. This project required staff members with offices on the second floor to temporarily relocate to the Falvey Hall (Old Falvey) reading room.

And there I worked, month after month, with that huge, dark, ugly travesty of a painting looming at my back. Since I was forced to share its space, I became curious. Who is this artist, Pietro Berretini de Cortona? “Pietro” and “Cortona” seemed familiar, but not the rest of the name as given on the placard. So I consulted a favorite resource, the ULAN (Getty Union List of Artists’ Names) . And there he was: Pietro da Cortona (1596-1669), an Italian Baroque artist and architect whose name I remembered from my days as an art history student and as an instructor. I searched Falvey’s catalog for books about Pietro da Cortona as a painter – nothing! So I pulled out my Baroque art textbook, 17th and 18th Century Art: Baroque Painting, Sculpture, Architecture by Julius S. Held and Donald Posner. Held and Posner say that Cortona is both a great Baroque architect and painter (p.36). And the Cortona paintings illustrated in this text and at several online sites present works that have the soaring spaces, diagonal compositions and rich colors that I have always associated with one style of Baroque art. Villanova’s “David and Goliath,” at least what I could see of it (even using the zoom lens of my camera), exhibited none of these characteristics.

Having satisfied my curiosity about the artist, I decided to check out the rest of the placard. The subject of the painting, David and Goliath, needed no research. The placard did provide a Biblical citation (I Kings 17:57, 18:6) and text, but when I checked I Kings, I did not find the quoted passages. Oops! Someone listed an inaccurate citation, and it has been on exhibit since 1956. That’s embarrassing for a Church-affiliated institution. The story of David and Goliath is actually told in I Samuel 17 and 18.

Who are these donors, Prince and Princess Alexis Droutzkoy, and what is their association with Villanova University? I contacted the campus Art Gallery’s assistant director, Maryanne Erwin (now retired); she had no information available. So I “Googled” them: the prince was a Russian-born, naturalized American citizen who had published American Helicopter Magazine. The princess, his wife, was an American from Georgia. Prince Alexis Droutzkoy died in 2001; the princess, Maria Theresa Droutzkoy, lives in the Bronx. But I still had no information about their connection with the University. And I would later learn that they were not the donors of the painting; they had paid for its conservation. 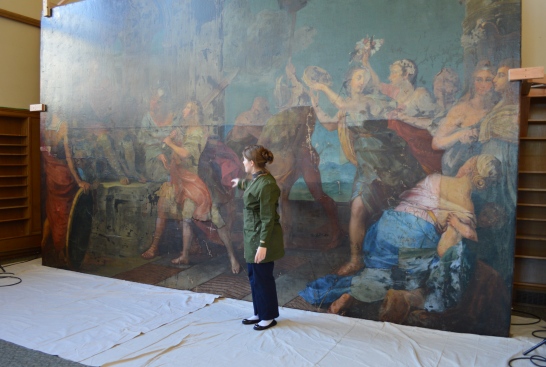 Eventually my colleagues and I moved out of the reading room and into our new offices. No longer forced to look at “David and Goliath,” I forgot about it until one day in February 2013. That afternoon, Library Director Joe Lucia told me the painting was being taken down, and he asked me to photograph this event. So I photographed a team of professionals (Atelier Art Services, Inc., of Philadelphia) carefully remove that gigantic painting and rest it against a wall in the reading room. Now I had the opportunity to examine it closely. From the front, it was still dark and, to my eyes, ugly and damaged with visible tears in the canvas, flaking paint and discolored varnish. The back, though, appeared very different: no tears visible and the canvas in excellent condition. (I’d soon learn that the painting had been professionally relined before arriving here; that is, a new canvas backing had been added to stabilize the damaged original.)

A few days after “David and Goliath” had been taken down, Joe Lucia again asked me to photograph a painting-related event. This one, a symposium, involved a number of people, mostly strangers but of great interest to me as an art historian. Conservation experts from the Winterthur/University of Delaware Program in Art Conservation, Brian Baade and Kristen deGhetaldi, and two Villanova University professors, Anthony Lagalante, PhD, Dept. of Chemistry, and Amanda Norbutus, PhD, Mendel Science Postdoctoral Fellow, presented their research to various administrators and other personnel. To my astonishment, they concluded that the painting is well worth conservation. Beneath the darkened varnish and modern overpaint (both from a 1950s restoration), much of the original painting remains. Pietro da Cortona, as noted above, is a major figure of the Baroque period, and a few of his works on canvas are in the United States. Despite its current appearance, this painting is indeed a treasure!

Now that conservation has begun, and the reading room is accessible 24/7, I occasionally visit “David and Goliath” (its formal title is “The Triumph of David” and it is listed in the Villanova University Art Collection: A Guide as “The Presentation of David to King Saul After Slaying Goliath”) just to observe the conservators at work and to note the changes in its appearance – nothing dramatic so far! You are welcome to visit the reading room anytime and see for yourself, a rare opportunity to see conservators at work. Or check the live feed video at http://projects.library.villanova.edu/paintingrestoration/live-feed/