Ever Wonder Where to Get Good Zombie Literature in Your Discipline? 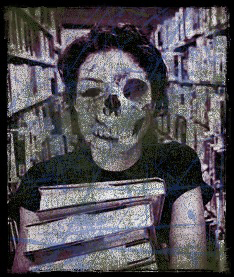 Zombie literature abounds. There’s even a rumor that Jules Verne authored the first zombie book ever written. That’s not really true, though. We only have a small amount of zombie-related literature. Yet, at this time of the year, some people ask, “Where can I get good zombie literature in my discipline?” (I said some people.)

Well for starters, the business bestseller rack holds, Zombie Banks: How Broken Banks and Debtor Nations are Crippling the Global Economy. Folklore or literature more your style?  Try Better off Dead: the Evolution of the Zombie as Post-Human, the excellent Zone One: a Novel, Feed and Cinema of George A. Romero: Knight of the Living Dead. There are even those that associate zombies and politics. Check out Theories of International Politics and Zombies. The Library has graphic novels too, like the ever popular The Walking Dead series. And remember the ever more popular Shaun of the Dead film and recent creations like I Am Legend and ParaNorman.

Back pack full? Try an e-book: Zombie Economics How Dead Ideas Still Walk Among Us or Preparedness 101 Zombie Pandemic (see also Centers for Disease Control and Prevention). Even grad students can learn to survive a zombie apocalypse, as evidenced in The Chronicle of Higher Education articles, “Dawn of the Grad: Rules for Surviving the Zombie Apocalypse and Your First Year at Grad School” and “The Zombie List.”

Of course we always hear about the limits of science, as in Man, Beast, and Zombie: What Science Can and Cannot Tell Us About Human Nature. However, no need to lose sleep over the idea of zombies. They can’t really exist. At least that’s the premise in Zombies and Consciousness, arguing against the possibility of zombies’ existence.

Actually, there’s a symbolism going on here – as a search of “living dead” titles will attest to.  In fact, “It is probably no surprise, then, that much of the imagery of zombie movies is borrowed, consciously or unconsciously, from Dante’s Inferno … who eerily resemble the description of the damned that Dante gives as he begins his descent into hell: they are ‘the suffering race of souls who lost the good of intellect.’” – (Gospel of the Living Dead, Paffenroth, p. 22).

And the idea of personal, zombie librarians is just a myth also. Of course, since it’s also a crunch time of year for research, real librarians can meet with you in person or assist you via chat or the online question form.

Merrill Stein is team leader of the Assessment team and liaison to the Department of Political Science.