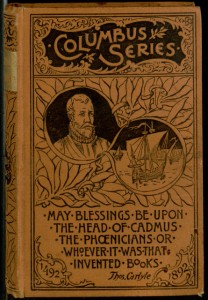 Our previous eBook release, A Dreadful Temptation, was part of an omnibus edition containing two novels. The second story from the volume is now our latest proofreading project: Wild Margaret, by Geraldine Fleming, which is actually a misattributed reprint of Charles Garvice’s His Guardian Angel.

Charles Garvice is one of several authors who are almost completely forgotten today in spite of selling millions of books during the late 19th and early 20th centuries. He is listed as one of the “big three” (along with Mrs. Georgie Sheldon and Mrs. Mary J. Holmes) in an ad on the back cover of our copy of The Bride of the Tomb; and Queenie’s Terrible Secret. His Wikipedia page provides a little bit of background information (plus a photograph featuring a monocle); a few of his other novels can already be found at Project Gutenberg.

The book is now available at the Distributed Proofreaders site. To help us create a new electronic edition, and to see what sold millions of copies over a century ago, you can read more about our proofreading efforts and then visit the project page.