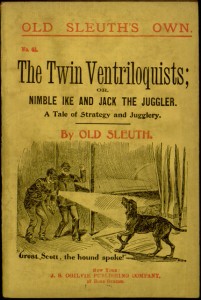 Another project has finished the proofreading process this week, and the title is a mouthful: The Twin Ventriloquists; or, Nimble Ike and Jack the Juggler: A Tale of Strategy and Jugglery.  As the title suggests, this is the story of two ventriloquists who use their ability to project their voices as a means of fighting crime — a premise more recently used to humorous effect in The Voice segments of old-time radio parody Two-Minute Danger Theater, but here taken completely seriously.

It cannot be said that The Twin Ventriloquists tells a compelling story — more recent conceptions of the mystery novel may lead the reader to expect a well-defined mystery, a web of clues, and a logical conclusion. Those things are all missing here — instead, two ventriloquists randomly wander through New York, encountering crime through sheer luck and thwarting it in a series of loosely-connected episodes often padded with terse and repetitive dialogue.  This is, apparently, the Old Sleuth style, designed primarily to produce a large number of books in a short period of time and to encourage people to buy them. The commercial nature of the series could not be more apparent than when the narration pauses to recommend that the reader buy other specific volumes in order to learn more about certain characters and events! For example:

Our hero was a good-looking chap. He had increased in strength and stature since first introduced to our readers in a former story, Number 6 of “Old Sleuth’s Own.”

It should be clear from all of this that The Twin Ventriloquists is not a literary masterpiece for the ages. It is, at best, an interesting glimpse into the evolution of commercialized entertainment. Yet, for all that, when it concludes by promising that in a future volume, “our readers will learn the thrilling romance of the life of Nimble Ike, the most wonderful ventriloquist yet known in all the world, and also will be revealed the secret of the mysterious box,” there is a certain genuine temptation to read on and learn more. Who can resist a mysterious box?

If you want to take a look for yourself, the entire volume can be read online or downloaded in a variety of popular formats through Project Gutenberg.