Planning to wear white after Labor Day? Go right ahead, but keep in mind that donning your summer whites after the first Monday in September wasn’t always appropriate.

White clothing emerged as approved summer attire in the early to mid-twentieth century, but the reasons have been debated. Some say this custom was born out of the need to stay cool in the hot (New York) city. Others cite social status as a reason for dressing down. Those who could afford to go to the country for the summer would shed their dark clothing for sportier, summer whites. Dark suits signified work; white clothing signified play. Of course, there were those who always bucked this fashion trend. Even as early as the 1920s Coco Chanel, for one, wore white year round. 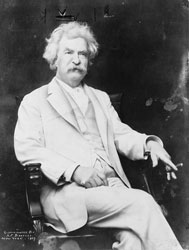 Some of our favorite writers also deferred to solid white clothing. Mark Twain took a stance on his fashion favorites when he told New York Times reporters in Washington on December 7, 1906 that he chose to wear all white because, at 71 years old, “the continual sight of dark clothing [was] likely to have a depressing effect upon him.” He felt that white clothing lifted the spirit and that he had earned the right to wear whatever he chose. 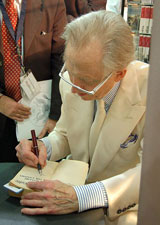 Tom Wolfe, author of The Right Stuff, A Man in Full and Bonfire of the Vanities,  to name a few, also prefers white suits. According to a book review in USA Today, Wolfe’s trend started in 1962 while he worked in New York as a reporter for the New York Herald Tribune. Having ordered a white silk twill suit that was too hot for the summer months, he wore it in the winter instead. Wolfe so loved the stir this fashion faux pas created that he adopted his “ice cream white suits” as his trademark.

Sometimes it’s not what you wear every day but what you leave behind that defines you. Mabel Loomis Todd said of Emily Dickinson, “She dresses wholly in white, & her mind is said to be perfectly wonderful” (Richard B. Sewall, The Life of Emily Dickinson). But even though Todd made this observation, Dickinson never mentions wearing white and seemed to favor calicoes as her fabric of choice. Regardless, it is the delicate hand- and machine-stitched white cotton dress with mother of pearl buttons that remains a symbol of Dickinson’s unique character.

Regardless of the stance you take on post Labor Day whites, rest assured that Emily Post’s Etiquette gives permission for us to wear white after Labor Day.