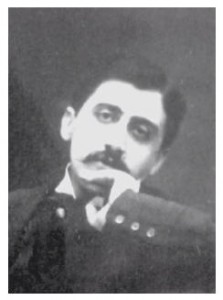 To recognize the 100th anniversary of Marcel Proust’s voluminous tome, In Search of Lost Time or Remembrance of Things Past (or in French, À la recherche du temps perdu), we are presenting you with a “snapshot” of the novel in the style of a modern food blog.

Why a food blog? Because Proust tells a story of small tea cakes known as “les madeleines” in his novel, a story that popularized them for all eternity (okay, for the last 100 years). We’re not sure if that is truly how this cake became famous. Nobody can seem to agree, including the Larousse Gastronomique, which offers two explanations.

Combray, the fictional village that serves as the setting for the madeleine story, is sometimes used in the name of the tea cake, Les Madeleines de Combray. While one source attributes the name to a woman named Madeleine who served the cakes to Proust, another claims they were named for Madeleine Paulmier, a pastry cook who baked them for Louis XV.

Take note that even the most expert historians have a different memory of the cake and its origins. Proust was very interested in memory, and used his novel to explore memory, both voluntary and involuntary. For instance, the story of the madeleine, excerpted at the end of this article, was used to illustrate Proust’s theory of involuntary memory. 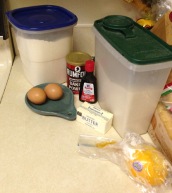 Before I forget, here is a list of the ingredients, in case you decide to experiment with memories on your own.

1 tsp. orange or lemon zest (I used Meyer lemons and added a few drops of juice)

Blend the softened butter and sugar until creamy, about 1-2 minutes on high with an electric mixer. Next add the vanilla, baking powder, one egg and citrus zest (and juice, if desired). Blend for another minute on low. Add the last egg and blend for another minute on low. Use a whisk to slowly add in the flour until smooth. (Don’t overdo it – the batter will get too sticky.)

Butter a madeleine tray and lightly flour. If using a non-stick tray, butter the tray. Fill each mold until level. (Don’t worry, the signature “bump” will appear no matter what you do.) Bake for 8-10 minutes for small madeleines, 12-14 minutes for large. My oven runs hot so 8-10 minutes was sufficient.

They should be golden at the edges and a buttery color on top when you remove them from the oven. (Try not to drift off into a reverie when you smell the delicious aroma.) Let them rest a few minutes before slipping them onto a cooling rack. Dust with confectioner’s sugar. 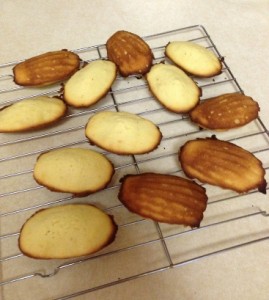 The moment of truth, according to Proust, will come when you have dipped the madeleine into a cup of tea and tasted the first morsel of cake. He described the revelation as one prompted by a physical sensation and as a completely involuntary recall of an earlier time. 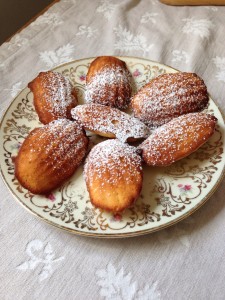 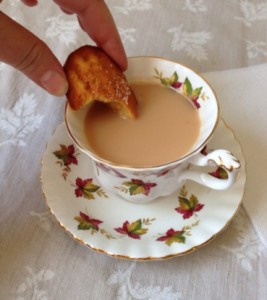 “No sooner had the warm liquid mixed with the crumbs touched my palate than a shudder ran through me and I stopped, intent upon the extraordinary thing that was happening to me. An exquisite pleasure had invaded my senses, something isolated, detached, with no suggestion of its origin. And at once the vicissitudes of life had become indifferent to me, its disasters innocuous, its brevity illusory – this new sensation having had on me the effect which love has of filling me with a precious essence; or rather this essence was not in me it was me. … Whence did it come? What did it mean? How could I seize and apprehend it? … And suddenly the memory revealed itself. The taste was that of the little piece of madeleine which on Sunday mornings at Combray (because on those mornings I did not go out before mass), when I went to say good morning to her in her bedroom, my aunt Léonie used to give me, dipping it first in her own cup of tea or tisane. The sight of the little madeleine had recalled nothing to my mind before I tasted it. And all from my cup of tea.” (Marcel Proust, In Search of Lost Time, 1913)

Luisa Cywinski is the editorial coordinator on the Communication and Service Promotion Team and the team leader of the Access Services team.