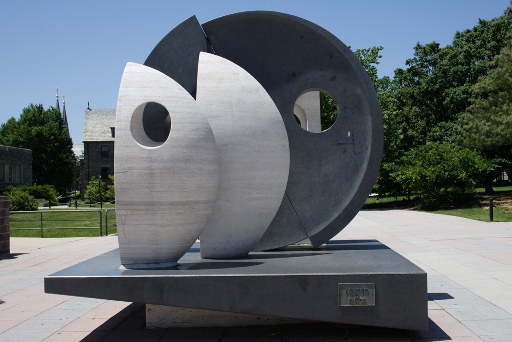 When we discovered the Oreo (cookie) celebrated its one hundredth birthday last year, we wondered “how old is Villanova’s ‘Oreo?’”

The Oreo, the world’s best-selling cookie, consists of two chocolate wafers and a white crème filling. Villanova’s “Oreo,” actually named “Awakening,” is a large abstract black and white stone sculpture located on the plaza in front of Dougherty Hall. “Awakening” has three white pylons, two on one side of a twelve feet high black disk with two circular openings and the third pylon on the opposite side. The stone for the polished black marble disk was quarried in North Africa. The white pylons are travertine from Italy. “Awakening” weighs twenty eight tons (that’s 56,000 pounds!) – a very large cookie.

Jay Dugan, the sculptor of the “Oreo”, named it “Awakening.”  Dugan said, “I chose the subject of an ‘Awakening’ for the University because a school is an environment where the students are learning and awakening to limitless conditions and fragments of knowledge.” (Villanovan, March 26, 1988, p. 6) He later explained, “What you try to do in an abstract sculpture is relate your ideas to the geometric shapes and allow them to represent your feelings. My purpose in creating it was to give a new dimension to the lives of Villanova students. (Villanovan, Sept. 9, 1988, p.7) Dugan said that he worked more than five hundred hours and over eight months in his studio in Italy to create “Awakening.”

Jay Dugan donated “Awakening” to Villanova in 1985. The University held a public dedication ceremony on May 5, 1985, outside the Connelly Center. The Villanova University Art Gallery hosted an exhibition of Dugan’s works.

Once installed on campus in a busy, central location and on a platform that is just the right height for sitting, the “Oreo” became a popular meeting place. Students ate lunch there (a 1989 photograph in the Villanovan shows garbage, “a constant eyesore,” left on its base), organizations held meetings beside the “Oreo” and, unfortunately, it also served as a bulletin board.

“Awakening” was vandalized on March 26, 1988. One of the white pylons was broken from its base and left on the ground beside the sculpture. The vandalism followed Villanova’s loss to Oklahoma in the NCAA (National Collegiate Athletic Association) basketball tournament. The University commissioned Dugan to repair it and on May 1 of that year he traveled to a quarry in Tivoli, Italy, to find suitable stone. The replacement pylon was installed December 27, 1988, by a crane; it took seven hours to place the three tons of travertine. Originally a slightly different color, the pylon has weathered to match the two originals.

“Awakening” was damaged a second time on March 17, 1990 when “DKE 90” was painted on it, perhaps a reaction to the disbanding of a fraternity. The Inter-fraternity Council organized a clean-up. About thirty students worked for about an hour to restore the sculpture to its original appearance.

In Phase I of the Transformation of the Campus Landscape the “Oreo” was moved to a temporary location on a high platform beside the construction site. In fall 2011 the “Oreo” was placed in its current location. You can watch a video of this move.

Jay Dugan, the sculptor and donor of “Awakening,” also donated a second work to Villanova. His “Cosmos” is inside the Connelly Center in front of the Belle Air Terrace.

Dugan (1919-1990) was born in Philadelphia, graduated from Northeast Catholic High School and hoped to attend Villanova University. He was unable enroll at Villanova because he had to help support his family. He held a variety of jobs before joining the Army Air Corps during World War II. After the war Dugan wrote for the Philadelphia Bulletin, worked free lance and in 1953 founded the Jay J. Dugan Agency, an advertising and sales promotion firm.

He began studying art in 1974 at the Barnes Foundation. He also studied at the Pennsylvania Academy of the Fine Arts. “I was a poor artist and a worse painter, but I had a knack for getting away from two-dimensional art. To me stone is of the earth. … It’s a very sensuous medium, warm and human because it’s so natural. People want to touch stone rather than steel,” Dugan said.

In 1982 he began donating his works to local colleges and universities such as Rosemont College, Lehigh University, Gwynedd-Mercy College, Bucknell University, LaSalle University, Lafayette College and others. “God has been good to me financially. You get to a stage where you want to give back instead of taking,” Dugan said. In his later years he spent half a day in his studio in a converted garage at his home in Meadowbrook and the rest in his agency. He died May 1990 at age seventy one.