eBook available: In the Depths of the Dark Continent 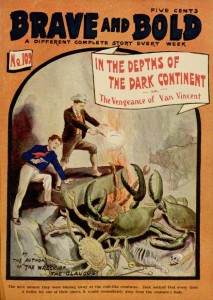 Our latest completed proofreading project is In the Depths of the Dark Continent; or, The Vengeance of Van Vincent, volume 109 in the Brave and Bold series of dime novels.  Like many Brave and Bold adventures, it is actually a condensed version of a serial previously published in the Golden Hours story paper, in this case a tale originally entitled Van Vincent’s Vow; or, Chased to the Heart of the Dark Continent.

In the story, a young man’s vow to avenge his uncle’s death leads him to Africa, where he pursues the villainous Doc Clancy into unknown territory, encountering countless dangers along the way. The adventure is sadly lacking in color, probably due to the fact that the text has been condensed from the original, and it contains many predictable dime novel clichés; still, there are certainly points of interest along the way, from the giant crab monsters depicted on the cover to a surprisingly brutal vision of Utopia:

Such a thing as money was not used in African Utopia. All hands worked, and the results of their different labors were freely exchanged, thus making everything of value equal to money.

When a man became too lazy to work for his living, he was thrown to a hungry lion as a warning to any who might chance to follow in his footsteps.

The people governed the beautiful place by electing a set of officers every year, and everything went on like clockwork.

The brutality of the tale also extends to its heroes, whose behavior often seems arrogant and senselessly destructive to the modern reader; clearly some attitudes have changed since the days of glorified colonialism.

You can find the entire story at Project Gutenberg, where it may be read online or downloaded in a variety of popular formats.