We recently acquired a 2-volume set of scrapbooks created by Frank R. Steed, an Army Field Clerk in World War I. Both volumes have now been digitized and there are many interesting things to be found within the pages. The materials are not affixed to pages in chronological order, but dates noted range from May 1918 to November 1919. In addition, Steed was inconsistent with his labeling of materials, so there will be several pages with very detailed descriptions written in followed by a run of pages with no notes at all. 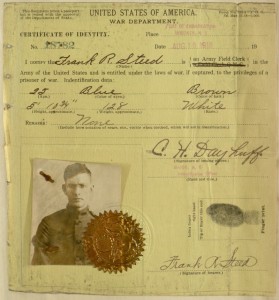 Frank R. Steed was discharged from the medical department at Camp Dix, New Jersey, and appointed as an Army Field Clerk in July 1918. A memo describes process for applying to become an Army field clerk: “A candidate to be eligible for appointment must … pass the required physical examination, be of good moral character and a citizen of the United States. Army field clerks have a military status, and as they are appointed to office by the Secretary of War, they are officers in the military service, although not commissioned officers.”

Steed was assigned to the Casualty Division of the American Expeditionary Forces in France. A letter from Steed’s superior, Lt. Col. Ernest G. Smith, details the work carried out by this division: “Our part in the Great Adventure concerned itself in large measure with the work of collecting and properly recording casualties of the A.E.F. This was one of the most trying as well as most important tasks of the war. How well it has been performed has been evinced from time to time by citations in orders as well as by favorable comment expressed by all who have investigated this work.” Smith goes on to thank Steed for his diligence and attitude: “Without these services so cheerfully, intelligently and dependably rendered, success would have been impossible.” 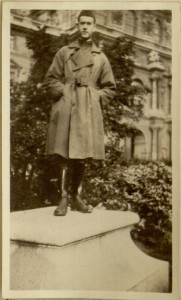 Steed posing as a statue on an empty pedestal in the Jardin des Tuileries.

Despite (or perhaps because of) the dismal nature of his job in the Casualties Division, Steed seems to have had a grand time in Paris and other French towns, as well as several other cities of Western Europe, including Brussels, London, and Dublin. The scrapbooks contain numerous photographs, postcards, programs, documents, menus, tickets, maps, tourist brochures, and even a few pen and pencil drawings. There is a lot to see and these bits of ephemera provide a fascinating glimpse back at Western European culture towards the end of and immediately after the Great War. There are also many postcards and notes from Steed’s friends and family and I am looking forward to looking at those more closely in the future.

Scrapbooks (and other types of hand-written/hand-made documents) are among the greatest pleasures of special collections and archives. Scrapbooks are especially challenging to digitize as there is no way to fully replicate the layers of paper and random objects (such as a bit of yarn or a toothpick) in digital form. Adding the metadata to these records was tedious, but I’m glad that we are able to share at least an approximation of these fascinating volumes. I hope that many more people will now have the pleasure of spending some time with Frank R. Steed in WWI Europe. It’s a bit like time travel, being able to share a personal perspective of life and events from almost 100 years ago.