My Villanova by Larry Goanos '84 LAS

There is a lot of history in Falvey Memorial Library, and not all of it is on the bookshelves! To commemorate Reunion 2013 Weekend, we asked several Villanova alumni to share a treasured memory or two of the campus Library and its resources. 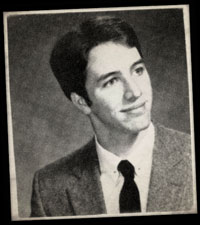 I cried twice during my four years at Villanova University in the early 1980s: On my first day on campus, because I was homesick, and on graduation day, because I didn’t want to leave. But it was a much more recent incident involving Villanova—one that almost brought me to tears—that inspired me to write this piece.

Growing up, it had never been my intention to attend any college, much less Villanova specifically. I felt that I was smart enough to make my way in the world, and assumed that after my graduation from Red Bank (N.J.) Catholic High School, I’d be done with formal education.

My mother, a master psychologist (though possessing no formal training other than maternal instincts and wisdom), felt otherwise. For no reason that I could pinpoint to this day, she had decided that I should attend Villanova. Nobody in our family had any connection to the school. In fact, my older sister was the first relative that I had known to graduate college.

Through a series of psychological maneuvers, most subtle but some not, my mother persuaded/encouraged/tricked (take your pick) me into choosing to attend Villanova.

Even though the school was only two hours away from our home at the Jersey Shore, it seemed like a different country. It was in suburban Philadelphia. People spoke with a funny accent. They said things like “hoe-mm” for “home” and “noo-ice” for “nice.” And it was far from the ocean. I had never lived far from the ocean. It felt like a foreign country and I was stuck.

Thus, the first bout of crying. It happened on my first day in the Stanford Hall community showers, Wing 4B. I just leaned up against the wall—nobody was around—and began sobbing, wondering what kind of mess I had gotten myself into by agreeing to attend this school.

Fast forward: The next four years were packed with learning experiences that broadened my horizons and helped prepare me for the world to come. Just as important, I had a lot of fun and met scores of great people. Many are still my friends today.

All those good times made it very hard to leave Villanova. At the end of my senior year, I was looking forward to attending law school at Boston College, but I knew it would never compare to my undergraduate experience.

As I stepped into the shower to get ready for our graduation ceremony on my very last day of college—this time in an off-campus apartment that I shared with my two roommates, Mike Healey and Steve Fallon — the sadness of leaving my beloved Villanova hit me all at once. I just leaned against the wall and cried for about three minutes, oblivious to the water cascading over me.

It’s been almost 28 years since I walked down the aisle at the Fieldhouse to accept my diploma. I can’t believe that it’s been that long. But Villanova has remained an important focal point in my life and in the lives of many of my alumni friends. We get together at least four or five times each basketball season to cheer on the Wildcats, plus at other times of the year for assorted events.

Villanova has earned a lot of accolades and has enjoyed considerable athletic success since I graduated (e.g. being consistently ranked #1 in its category by U.S News and World Report and winning national championships in men’s basketball and football), but I don’t think I was ever as proud of the University as I was last spring.

Two years ago, the son of a work friend of mine was considering four good colleges, and one of them was Villanova. I had never met the boy, but my friend asked me to e-mail his son with my thoughts on Villanova. While ostensibly trying to maintain a veneer of impartiality, I analyzed his list of acceptances for him via e-mail, and did my best to subtly steer him to Villanova (some of my mother’s skills of persuasion, it seems, were passed down.)

We exchanged three or four e-mails. Ultimately, the boy chose to become a Wildcat. I’m sure my mother was smiling down from above. My friend thanked me for providing guidance to his son.

Last June, I had lunch with that friend. I asked him how his son had fared during his first year in college.

His face took on a noticeably pained look and he said, “Well, actually, my son had a very tough first semester, and was not doing well in the second semester, when Villanova called me and my wife in for a meeting in April. They offered our son a medical leave so that he could take new medication for a learning disability that he has, and try to get his grades up at another college before trying to transfer back into Villanova.”

He went on to say that his son, who has great native intelligence, had lost his focus while living away from home with the freedom of college life and his academic performance suffered.

“You know Larry,” he said, “If I were Villanova, I would’ve just kicked him out for not performing up to par, but they didn’t do that. They treated us unbelievably well. The counselor at the school said ‘You’re part of the Villanova family now, we’ll do everything we can to help you …’ I couldn’t believe it.”

I was never prouder of our great—and good—University. It made me choke up a bit right there at the lunch table, although, luckily, not quite to the point of tears. I looked skyward and silently thanked my mother once again.

Larry Goanos is the CEO of Andros Risk Services, an independent insurance consulting firm. He’s also the author of “Claims Made & Reported: A Journey Through D&O, E&O and Other Professional Lines of Insurance” (2008 Soho Publishing, www.sixthandspringbooks.com; all proceeds go to four charities.) Warren Buffet said of the book: “It deserves accolades … The chapter on September 11th was particularly moving.” He can be reached at lgoanos@androsriskservices.com.