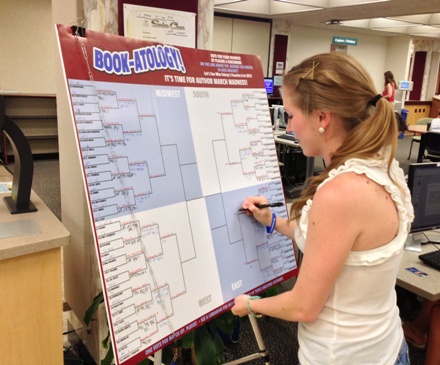 With the Louisville Cardinals bringing the NCAA tournament to an exciting close, bracket addicts everywhere are looking around for their next fix. But before you go and do something drastic like following the 76ers, why not try voting in the Library’s Author March Madness? The tournament enters the Elegant Eight this week, and we’ve got all the re-caps and previews right here. Be sure to stick the Library News blog for more updates, including forthcoming announcements regarding the prize drawing we’ll be holding during the Final Four. On to the games!

What’s the best part about March Madness? The story lines! And with J.R.R. Tolkien and C.S. Lewis defeating Ray Bradbury and Agatha Christie respectively, we’ve got ourselves an Elegant Eight match-up made in heaven. I’ve got an inkling that Tolkien will win handily, but that’s only because I carry a picture of Legolas with me at all times (just in case).

Shakespeare was heavily favored in his match-up against Oscar Wilde, but the witty aesthete came out swinging in earnest and created one of the most exciting matches of the tournament thus far.  Wilde may have gotten support from the theater department here at Villanova—they are putting on a production of Salome that runs this very weekend.  But alas, The Great Bard finished strong, eking out a 32-27 victory. He’s earned himself a rhyme-time match-up against tournament favorite Dr. Seuss in the eight, so there’s one to watch out for.

Another major upset in the South, with four seed F. Scott Fitzgerald taking down powerhouse Charles Dickens. Everything I want to say about this victory has already been communicated by this Lee Greenwood song, so why should I waste my breath?

J.K. Rowling defeated Herman Melville 47-15, proving once and for all that booger flavored jellybeans have stronger cultural influence than Herman’s sprawling nautical epic of the American sublime. The debate is over everyone, we can stop talking about it.

Further down we saw an interesting match-up between Joyce and Hemingway.  Legend has it these two were drinking buddies, to the extent that anyone could be a “buddy” to Ernest after he’d had a few (read: eight) mojitos. There may have been a strategic valence to this relationship, as you can see in the video below. In any case, Hemingway had no problem “dealing with” Joyce. He took the match 37-20.

So there you have it folks.  Be sure to look at the tournament board on the first floor of the library and to cast one vote in each match. See you in the Final Four.