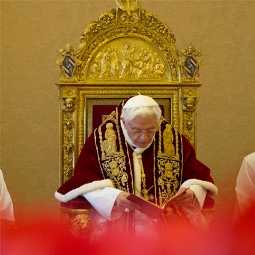 Habemus Papam, one of the most famous Latin phrases still in use today, means “We have a Pope!” It will be said preceding the announcement of which bishop is to be elevated to the office of supreme pontiff. But this ceremony follows a great deal of ritual surrounding the election of a new pope by the group of electors from the College of Cardinals. For a thorough description of the process, see “Election of new pope follows detailed procedure,” a Catholic News Service story.

Pope Benedict XVI’s official abdication of the Chair of Peter on February 28 signals the first time in modern history that the bishop of Rome has retired rather than stay in office until the end of his mortal life. Many have reacted to this news in various ways, but blogger Rocco Palmo summarizes some of the issues related to the papal resignation very well in his Feb. 12 post: “And Now, ‘Vatishock’.” Palmo’s blog Whispers in the Loggia has received accolades for his deeply insightful and punctiliar style of reporting on ecclesiastical affairs. Another online source to watch for Catholic Church news is “Live Catholic Headlines from the last 30 days.”

As the world turns its view towards the papal election, keep in mind Falvey has reputable newspapers and magazines with features, opinion, and analysis that will greatly enhance an understanding of current events. Issues of renowned Catholic magazines, America, Commonweal, The Tablet, and U.S. Catholic for example, as well as newspapers, such as the National Catholic Register, National Catholic Reporter, and Our Sunday Visitor are available for reading in the current periodical area on the first floor of the Library. Like many news periodicals today, however, the weekly newspaper from the Vatican L’Osservatore Romano has content online and in print, including editorials like “The future is God’s” from the same day as Benedict XVI “announced his decision to ‘renounce the ministry of Bishop of Rome’.”

Another resource, Origins, is the documentary service publication from the Catholic News Service organization. The Feb. 21 issue of Origins has “Reactions to Pope Benedict XVI’s Resignation” by various religious and civic leaders, as well as an English translation of the statement of resignation by Pope Benedict XVI. Origins is a digest of official and authoritative sources of information, including speeches and statements on matters related to the Catholic Church. Recent issues of Origins have been placed on reserve in the Library, so you need to ask for them at the circulation desk. There is an online archive of Origins to which Falvey subscribes, too. The Journal Finder is the best way to determine if Falvey provides access to content from periodicals either in print or online, or both.

Darren Poley is the theology and religious studies subject librarian. Contact him directly at darren.poley@villanova.edu.