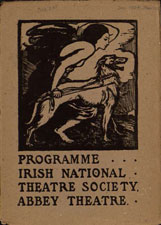 “Curtain Call …” is divided into six sections: “Curtain Call,” “Setting the Stage,” “Casting Call,” “The Play’s the Thing,” “Criticism and Reviews,” and “The Bard.”

The “Curtain Call” section, in the tall glass cabinet, features four programs from Belle Masque Dramatic Society productions (1948-1961) and seven posters from various Villanova University plays. In “Setting the Stage” Bang has gathered programs from some notable theatre companies, including the Abbey Theatre, Dublin, Ireland, and the University’s past theatre groups. “Histoire Générale Illustrée Du Theatre” by Lucien Dubech, et al, is opened to an illustration of a Greek theatre.

“Casting Call,” according to Bang, “contains information on some notable performers as well as some behind-the-scenes glimpses of the production side of a play.” Particularly interesting is a large sketch of Brian G. Morgan, MA ‘70, BA ‘67. Other images show Villanova actors reviewing scripts, a selection of theatre-arts prints and a copy of “Le Theatre” (December 1898) opened to a story about Loïe Fuller (1862-1928), an American actor and dancer. 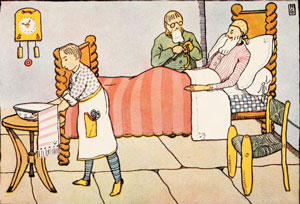 “The Play’s the Thing” displays play scripts including three written by the cofounders of the Abbey Theatre: “The Golden Apple: A Play for Kiltartan Children,” written by an Irish woman, Lady Gregory; and “Vision: A Tale of the Time of Christ” by the Rev. John F. Burns, OSA, of Villanova. This case also highlights a program from the “[f]irst entertainment given by the Villanova College Dramatic Society” on Thanksgiving evening, 1873.

“Criticism and Review” includes three works: an anonymous critical review of “The Playboy of the Western World” in The Lepracaum [sic], a 1907 Irish publication; a 1905 critical review by Bernard Shaw and John Corbin, “The Author’s Apology From [sic] Mrs. Warren’s Profession”; and a review in a periodical, “Samhain,” edited by W. B. Yates.

The final section of the exhibit, “The Bard,” highlights the work of William Shakespeare, whose “characters and plays … are [probably the] most widely known in the Western world” (Bang). Three books and a collection of plates from “Theatre Arts Prints” provide a sampling of Shakespeare’s works.

This exhibit will remain on view for the spring semester except for a brief hiatus for an Easter exhibit.