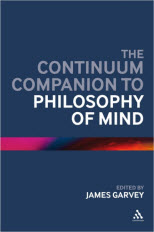 Despite their popularity, the Cambridge Companions are not the only user-friendly scholarly compendia to the different areas of philosophy. In addition to the Cambridge series, the library provides access to several other series of guides, notably the Continuum Companions, Blackwell Guides, and Oxford Handbooks. These typically follow the model set by the Cambridge Companions: each volume presents specially-commissioned articles that orient the reader in a given topic, while in most cases also setting out the author’s own position as a point of entry to the wider debate. These series also draw authors who are experts on their topics, so the quality is consistently high. In fact, it’s not uncommon to see the same authors cropping up repeatedly across several series.

And as with the Cambridge Companions, these series are good for providing a foundation in a topic, and pointing out avenues for further investigation. Titles invariably contain representative bibliographies, and the essays themselves provide context for other important authors and their contributions. The Continuum Companions do a particularly nice job of supplying extras. The Continuum Companion to Pragmatism, for example, includes a list of important journals and professional organizations, and directs readers to the Pragmatism Cybrary, an internet hub for pragmatism scholarship. Similarly, The Continuum Companion to Continental Philosophy comes with a glossary, a contextual timeline, and a list of research resources.

The main drawback to these other series is that, unlike the Cambridge Companions, they are not generally available online. There are times when this is less than ideal. The Oxford Handbooks in particular tend to be large, bulky things that are difficult to read comfortably. But that shouldn’t dissuade you from using them, since they often contain valuable content not available elsewhere. For instance, an entire third of The Oxford Handbook of Continental Philosophy—seven essays—is devoted to “problems of method,” an important topic to which the rival Continuum volume gives only a single essay. (At the moment there is no general Cambridge volume for continental philosophy). Oxford is also the first to deliver a volume (coming soon to Falvey) focused on philosophy and neuroscience, an area that is attracting great attention at present.

A list of our holdings for each of these series can be obtained by doing a title search in the catalog for “Continuum Companion,” “Blackwell Guide,” or “Oxford Handbook.”