E-Books at Falvey: A Survey of Students and Faculty

By Linda Hauck and Merrill Stein 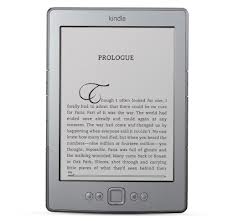 Anyone with even a passing interest in reading books, book publishing, libraries or gadgets has noticed that e-books have finally reached that long predicted tipping point to become mainstream. They’re not just for geeky gadget lovers anymore. To glean a clearer picture of how they’d like to see the library collection evolve, we took a closer look at how students and faculty are using our e-books.

History of e-Books at Falvey

E-books (not just digital encyclopedias) have been a part of Falvey Memorial Library’s collection mix since well before the tipping point. In the 1990s Falvey joined a library consortium to purchase a collection of individual titles via NetLibrary, an academic e-book pioneer that has since been acquired by EBSCO Publishing.

Our very first e-books weren’t online at all. In the mid 1990’s the Library purchased CDs with the text of Past Masters and the Library of Latin Texts , both of which were not online. We subscribed to our first online e-book collection, Patrologia Latina, in 1997.

In 2008, the reference librarians undertook a major initiative to shift our reference book collection from print to online. In that year we significantly expanded access to digital encyclopedias, directories, compendia and handbooks. Since we started tracking e-book purchases as a distinct “book” material type, spending on e-books vs. print books has grown from 9.9% in 2007/8 to a plateau of 12.6% in 2008/9 and 12.4% in 2009/10 with a jump to 22.6% in 2010/11.

Until now our understanding of e-book usage patterns by Falvey Memorial Library patrons has been viewed through the prism of usage statistics and unstructured conversations with students and faculty. To view e-book usage from another angle, an online survey was made available, via a link on our website banner, to self-selected respondents during four weeks in the spring of 2012. Six questions looked at the use of Falvey e-books, purpose for use, device used for access, perceived usability and discovery modes. To encourage participation, respondents were entered into a random drawing for one of three $20.00 gift cards.

In total, 88 participants responded, including nearly even numbers undergraduate (45.6%) and graduate students (43.3%). Of the remaining respondents, seven (7.8%) were faculty members and six (6.6%) were staff members or other. The low response rate by faculty makes any conclusions about e-book behavior and preferences for these community members tenuous.

Over half (53.3%) of the respondents reported never using an e-book from the Falvey Memorial Library collection whereas 34.4% used them only once or twice, and 12.2% used e-books in the collection three or more times. This pattern is consistent with both undergraduates and graduate students.

Due to the simplicity of the survey, we don’t have a good sense of whether respondents had an expansive or restrictive idea of the nature of e-books.  (For instance, if they found a chapter of a book in SpringerLink, was this recognized as an e-book use or a database use; would they count use of an electronic encyclopedia as an e-book use or would they only consider reading a digital monograph an e-book use?) 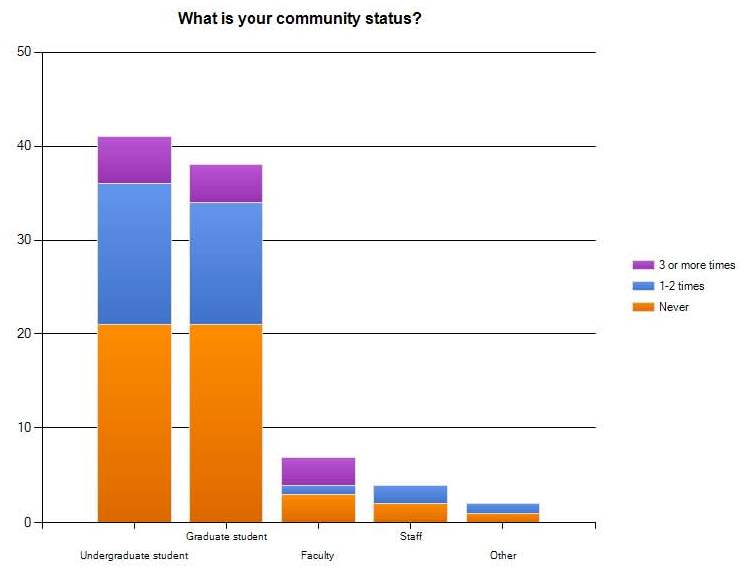 Almost two thirds (66.6%) of the respondents reported that e-book usability was satisfactory, 22.2% rated it very good and only 11.1% rated usability poor. In the future, a closer look at how respondents’ e-book use corresponds to purpose of use and device used is in order.

Users choosing e-books for research often rated the usability of e-books as satisfactory or very good, compared with respondents who did not use e-books for research. This finding is interesting because it is often mentioned that e-books lack the convenience of print books in that data are not always optimally displayed, checking sources and notes is unwieldy and marking marginalia is cumbersome. On the other hand, when reading a short-form document such inconveniences become insignificant. Our survey did not ask respondents what kind of e-book they had used for their research. Perhaps these e-book users were using encyclopedia articles, collections of essays or other brief form reference books rather than full length monographs (or individual titles) for research.

Tablet users clearly rated e-book usability higher than did users of other devices. Tablet users were least likely to rate usability poor (6%) and most likely to rate e-books very good (25%) or satisfactory (68%). Though Kindle, SONY and Nook users were most disappointed with usability of e-books (16%), they were substantially (84%) the same as laptop (86%) and smart phone (86%) users, reporting “satisfactory” to “very good” usability. A discussion with respondents about what features (immediacy, ease of downloading, note taking features, printing capability and transferability between devices) of e-books contributed to usability or lack thereof would give us a more detailed picture of the types of e-books preferred by our students and faculty. 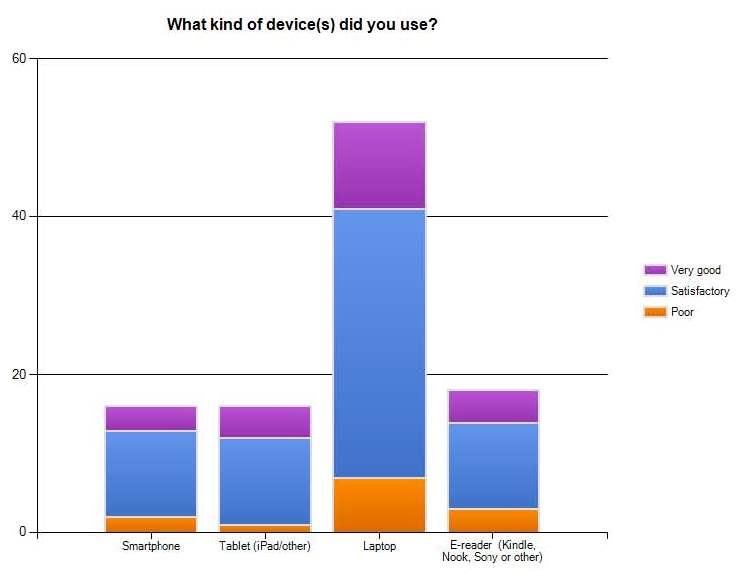 Purpose of E-Book Use

Over half of the e-book usage was for research (55.2%) and presumably not for entertainment. As might be expected, graduate students and faculty used e-books for research more than undergraduates, perhaps because these groups do more book reading for research overall.

A 2011 worldwide survey of college students found e-book usage to be significantly higher than that of previous years. In that survey conducted by ebrary (a leading e-book provider), use of print and e-books for research/class assignments was very close at 79% and 74% respectively (among the top ten resources used for class assignments/research). Future inquiry into e-book-research usage could ascertain the type of research conducted when e-books are used. It would be interesting to know if e-book usage varies by discipline or type, such as applied, basic or literature review. 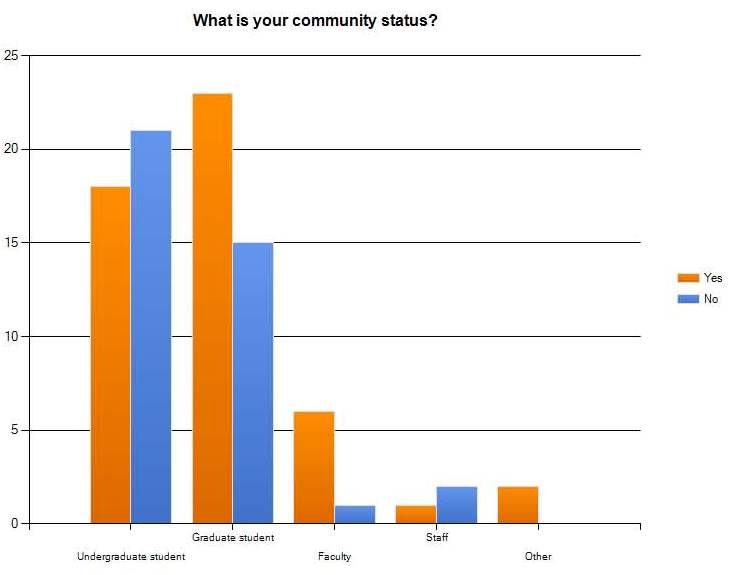 In a casual inquiry into popular reading habits of our students taken during the Fall 2011 Library Open House, we learned that 78% of undergraduates responding preferred print books for leisure reading, and almost 18% of undergraduates like to read on devices. Graduate students have a slightly stronger preference for devices with almost 24% preferring devices to paper for pleasure reading. Audio books have a small following among both graduate and undergraduate leisure readers. 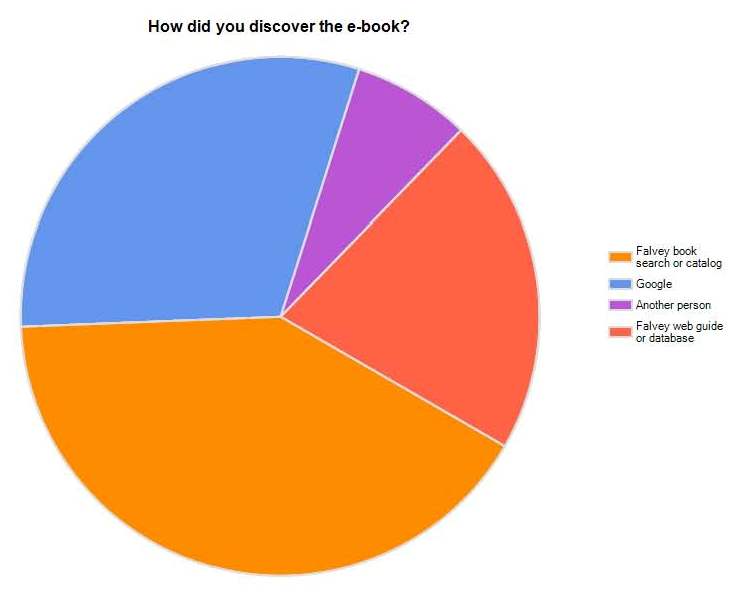 By far, laptops (69%) are the device of choice for respondents reading e-books. Smart phones and tablets received equal numbers of respondents (16%), and a slightly greater number (21%) are using dedicated e-readers such as a Kindle, Nook or Sony. Regardless of the respondent status, this concentration of devices used, for the most part, held steady among classes of respondents. However, graduate students did use dedicated e-readers more than undergraduates and faculty.

E-book usage is by no means exclusive to one device. Laptop users also use smart phones, tablets and dedicated readers. However, tablet users report using other devices less frequently than dedicated readers, laptop or smart phone users. These findings are very much in line with a 2011 Library Journal survey. Academic-librarian respondents reported that library or personal computers were most often used but other devices, such as dedicated e-readers and other mobile devices, are trending upward.

However,  a Pew Internet and American Life project survey, taken before the most recent gift giving season, indicates that among e-book readers, daily and weekly users most often turn to dedicated e-readers (61%) and tablets (44%) whereas laptops are only used daily and weekly by 18% of respondents  (Pew, April 2012, Rise of E-Reading). This data from Pew seem to be signaling that the current practice of using laptops for reading digital books is likely transitory. 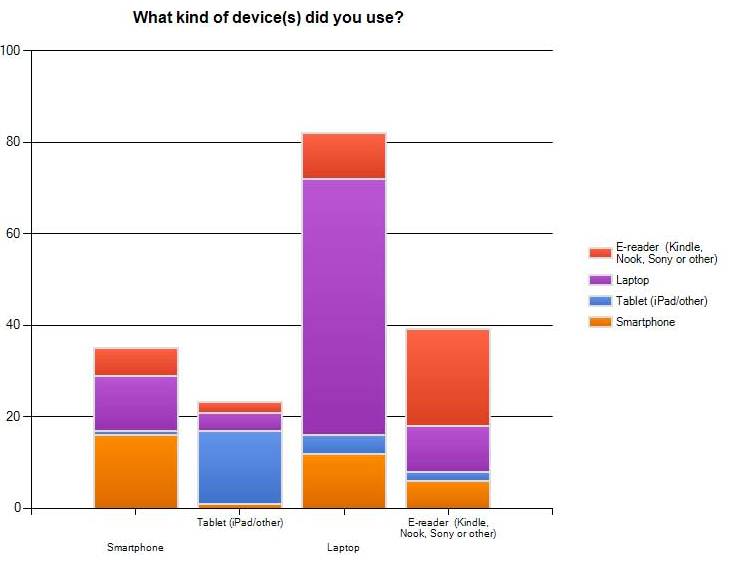 In order to devise a winning e-book collection-development strategy for our users, Falvey Memorial Library will monitor trends by users, other libraries and  e-book distributors and suppliers via studies such as those done by Library Journal,  Pew Internet and American Life and trade news. The creation of a comprehensive  report, one that examines all our e-book platforms together, for example, could yield meaningful insight to the variety of usage data Falvey has acquired. In addition, a qualitative study of e-book user preferences and practices at Villanova would provide further insights.

To summarize our findings, of 88 respondents, composed mainly of similar numbers of undergraduate and graduate students, about 1/3 of the students have used e-books once or twice.  Many had not used e-books at Falvey.  This is perhaps an indication that Falvey has not yet reached a critical mass of e-books. Falvey currently provides access to over 18,000 e-books.

Those using e-books rated usability as satisfactory. Tablets and laptops were the most preferred devices for reading e-books. Features that make them preferable to e-reader devices may also need to be further examined.  A previous, informal Falvey study indicated that, where leisure reading was concerned, both graduate and undergraduate students used dedicated e-readers.

Our survey did not look at patterns of e-book usage by discipline. Studies conducted over 10 years ago and as recently as last year point to patterns of robustness in e-book usage tied to specific disciplines and by publication date. For instance, Herlihy and Yi (2012) found that “comparing usage in the same disciplines from both e-book packages confirmed that in business, computing, science, and technology in particular the relevance of material to researchers is directly proportional to date of publication.”

In 2011, Dillon noted that, after cataloging, wider distribution of use across subject lines was seen. So, it is significant that a majority of respondents found that the library interface (VuFind) and Google Books were top e-book discovery tools.  When web site and or VuFind usability studies are next conducted, the addition of tasks specifically geared toward e-book discoverability may lead to incremental improvements in access.

As Dillon most recently notes (2011), “E-books from Google e-books will be permanently housed in the digital cloud. … It could be a huge step toward setting up a single global e-book market.”  Still, key concerns in expanding e-book access and usage remain business models (ownership, subscription models and pay-per-view options), licenses and digital rights management (DRM) (Vasileiou, et. al. 2012). While Dillon (2011) concludes “Whatever directions the industry takes, let us hope that the unique communication product that is the book survives,” graphic communications industry writer, Richard Romano (2011) writes that this issue represents a “future of content – be it book or otherwise. … There is significant overlap among all these things. … It’s a mistake to get overly obsessive about the form in which it’s delivered.”

Armed with more information as e-book habits develop, subject librarians individually may be better equipped to position Falvey as a leader and shaper of “content” collection development for academic libraries.