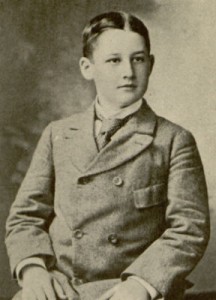 One of the latest of our books to be made available as a Project Gutenberg ebook is Bolax: Imp or Angel–Which? by Mrs. Josephine Culpeper. Besides having one of the most fantastic titles I have ever encountered, this book is a fictionalized biographical account of Mrs. Culpeper’s son, Bolax, who attended the boys’ academy at Villanova for a few years before transferring to another school.

Mrs. Culpeper raised her family in the area — in Wayne on the Main Line — and our copy of the book was presented to Villanova College (as it was then) by the author. In an inscription at the front of the book, Mrs. Culpeper explains the origin of Bolax’s name:

“The odd name comes from the boy’s father calling him bowlegs because as a baby he walked crooked. The boy caught the sound as Bolax and was so called until quite a big boy.”

“In 1892-93 the son of Mrs. Josephine Culpeper, Osmond J., attended classes at Villanova, to which reference is made in her pages. Mrs. C– lives at Wayne, Pa.; it was from thence that the little ‘Bolax’ was sent to St. Thomas of Villanova….”

There is also a letter inserted between the pages after the above notes, in which Mrs. Culpeper says that the book is “true to life” and that she “kept a diary of all [her] children’s saying and doings and from this wrote the book.”

The book follows the escapades of Bolax from the age of five to fourteen. He has an older sister named Amy as well, but the primary focus is on Bolax and his struggles to be a good Catholic boy. Among his adventures and misadventures, Bolax goes for a “real piggie-back ride” (p. 13), a picnic with his Sunday school class (p. 42ff.), and his first confession (p. 62). Bolax declares his wish to attend the school at St. Thomas’ College on page 70 and he is admitted on page 77, even though at nine he is two or three years younger than their youngest pupils. Bolax attends the boys’ preparatory school that eventually became Malvern Preparatory School. Some of the noteworthy mentions of life at Villanova include the description of Bolax’s first two weeks (p. 83ff.), an epidemic of scarlet fever (p. 155-6), and slang expressions in use at the school (p. 159). 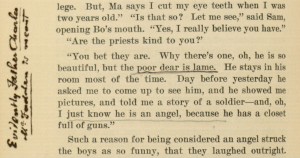 Bolax describes one of the priests at Villanova on
page 84 and a marginal note poses a possible
candidate for the real-life Augustinian alluded to
(“Evidently Father Charles McFadden is meant”).

There are some interesting scenes and insights into late-19th-century life in the Philadelphia suburbs, but it is a rather oddly written book that incorporates many different writing styles that don’t really blend well. Besides the (fictionalized) biographical narrative, there are epistolary passages and several didactic passages — on topics ranging from the lifecycle of the ladybug (p. 35-6) and how to raise good little boys (p. 52-60) to a “pleasant controversy” of differing religious views (p. 29-32). Of course, the writing also incorporates the casual racism that was common at the time. In addition to the variety of writing styles, there are also quite a lot of typos and grammatical mistakes — some of which a previous reader tried to correct in pencil (see, for example, the third line of page 13) — which makes the book seem like an early-20th-century version of a vanity press publication. Despite these flaws, Bolax is still a good read for those interested in the social history of the Main Line, late-19th/early-20th-century Catholic life, or the history of the prep school at Villanova.

If you’re interested in seeing the marginalia, you can view the page images of Bolax in our Digital Library. For a cleaner reading experience, you can download the ebook or view it online at Project Gutenberg. You can read more about our proofreading project here.