Falvey Library receives new philosophy books every day, and you never know when something exciting, important or serendipitous will appear. Here are a few of the latest. 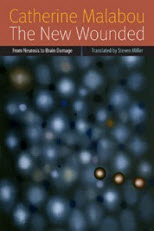 From the publisher: “This book employs a philosophical approach to the “new wounded” (brain lesion patients) to stage a confrontation between psychoanalysis and contemporary neurobiology, focused on the issue of trauma and psychic wounds. It thereby reevaluates the brain as an organ that is not separated from psychic life but rather at its center.The “new wounded” suffer from psychic wounds that traditional psychoanalysis, with its emphasis on the psyche’s need to integrate events into its own history, cannot understand or cure. They are victims of various cerebral lesions or attacks, including degenerative brain diseases such as Parkinson’s and Alzheimer’s. … Effacing the limits that separate “neurobiology” from “sociopathy,” brain damage tends also to blur the boundaries between history and nature. At the same time, it reveals that political oppression today assumes the guise of a traumatic blow stripped of all justification. We are thus dealing with a strange mixture of nature and politics, in which politics takes on the appearance of nature, and nature disappears in order to assume the mask of politics.” 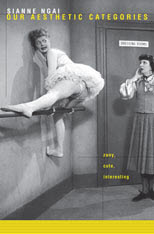 From the publisher: “The zany, the cute, and the interesting saturate postmodern culture. They dominate the look of its art and commodities as well as our discourse about the ambivalent feelings these objects often inspire. In this radiant study, Sianne Ngai offers a theory of the aesthetic categories that most people use to process the hypercommodified, mass-mediated, performance-driven world of late capitalism, treating them with the same seriousness philosophers have reserved for analysis of the beautiful and the sublime. Ngai explores how each of these aesthetic categories expresses conflicting feelings that connect to the ways in which postmodern subjects work, exchange, and consume. As a style of performing that takes the form of affective labor, the zany is bound up with production and engages our playfulness and our sense of desperation. The interesting is tied to the circulation of discourse and inspires interest but also boredom. The cute’s involvement with consumption brings out feelings of tenderness and aggression simultaneously. At the deepest level, Ngai argues, these equivocal categories are about our complex relationship to performing, information, and commodities.” 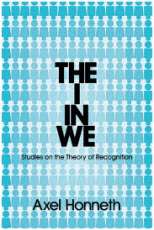 The I in We: Studies in the Theory of Recognition by Axel Honneth (Polity)

From the publisher: “In this volume Axel Honneth deepens and develops his highly influential theory of recognition, showing how it enables us both to rethink the concept of justice and to offer a compelling account of the relationship between social reproduction and individual identity formation. Drawing on his reassessment of Hegel’s practical philosophy, Honneth argues that our conception of social justice should be redirected from a preoccupation with the principles of distributing goods to a focus on the measures for creating symmetical relations of recognition. This theoretical reorientation has far-reaching implications for the theory of justice, as it obliges this theory to engage directly with problems concerning the organization of work and with the ideologies that stabilize relations of domination. In the final part of this volume Honneth shows how the theory of recognition provides a fruitful and illuminating way of exploring the relation between social reproduction and identity formation. Rather than seeing groups as regressive social forms that threaten the autonomy of the individual, Honneth argues that the ‘I’ is dependent on forms of social recognition embodied in groups, since neither self-respect nor self-esteem can be maintained without the supportive experience of practising shared values in the group.” 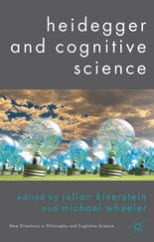 From the publisher: “The cognitive scientists of today are increasingly occupied with investigating the ways in which human cognition depends on the dynamic interaction over multiple time scales of brain, body and world. The old vision of the mind as a logic machine whose workings could be explained in abstraction from the biological body and the cultural environment is looking increasingly untenable and outdated. This collection explores the idea that this development in cognitive science can be productively interpreted through an encounter with Heidegger’s existential phenomenology. Not only can Heidegger help us to understand the history of cognitive science but his philosophy also provides a conceptual framework for the cognitive science of today and of the future. Heidegger, however, is standardly interpreted as being resolutely anti-naturalist, as insisting that a scientific understanding of human beings is necessarily limited and partial in what it can tell us about human existence. Can there be a cognitive science of human existence or is such a project doomed to fail for reasons already articulated in Heidegger’s philosophy?” 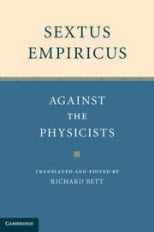 From the publisher: “Sextus Empiricus’ Against the Physicists examines numerous topics central to ancient Greek inquiries into the nature of the physical world, covering subjects such as god, cause and effect, whole and part, bodies, place, motion, time, number, coming into being and perishing and is the most extensive surviving treatment of these topics by an ancient Greek sceptic. Sextus scrutinizes the theories of non-sceptical thinkers, and generates suspension of judgement through the assembly of equally powerful opposing arguments. Richard Bett’s edition provides crucial background information about the text and elucidation of difficult passages. His accurate and readable translation is supported by substantial interpretative aids, including a glossary and a list of parallel passages relating Against the Physicists to other works by Sextus. This is an indispensable edition for advanced students and scholars studying this important work by an influential philosopher.”