Thee, Thou, and Ain’t 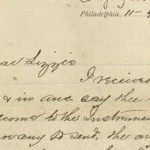 Thus begins a letter from John Alban Kite to his sister, Elizabeth Sarah Kite. Elizabeth Kite’s early letters in this new collection from the Digital Library, came mainly from her Quaker family. The letters’ heavy use of “thee” and “thou,” a common practice of Quakers of that time, gives them a formal tone to our modern ears. The family took care with their writing, sometimes chiding Elizabeth if her letter fell short of their writing expectations. Her grandfather lectured in an 1875 letter to Elizabeth, “I wish to encourage my grandchildren to accustom themselves to the use of the pen in epistolary correspondence for to become a good letter writer is quite an attainment.” (From , Letter to: Elizabeth Sarah Kite, From: John L. (John Letchworth) Kite, November 8, 1875.)

How then could one of John L. Kite’s grandchildren, five years later, use the word that appears at the very top of the first page of that same 1880 letter? It is that ultimate of colloquialisms that will sound the “uneducated” alarm, even in children’s ears, today:

Ain’t this beautiful weather? What would grandfather think? The day after I read this surprising use of slang by a member of the Kite family and seeming anachronism I saw a new book entitled The Story of Ain’t by David Skinner. While the book did not answer my particular questions as to when the word began and if it was considered slang by John Alban Kite and the rest of his family, it chided me to search further.

According to Merriam-Webster’s Dictionary of English Usage the word “ain’t” was commonly used during the time that John Alban Kite wrote this letter and was not quite as vilified for use in casual conversation as it is today. It’s difficult to say if his grandfather would have approved of its use in writing an “epistolary correspondence,” but it’s fun to see in this context today … ain’t it?