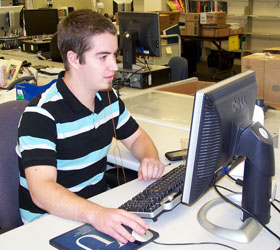 Chris’ duties involve writing and documenting code. He assists with VuFind, VuDL and other smaller projects.

Katz says, “Chris has been a tremendous help with the huge project of updating VuFind for a 2.0 release. His eye for visual interfaces has led to some nice cosmetic improvements to the look and feel of VuFind, and his work will also eventually lead to a major overhaul of the Digital Library book reader.”

Chris has two bachelor’s degrees, one in interactive multimedia and the other in computer science, from The College of New Jersey in Ewing. He is enrolled in the Department of Computing Sciences at Villanova University, working on a master’s degree, which he plans to complete in 2013.

He is considering pursuing a doctorate. “If not, I’ll be looking for work as a web developer. I will be starting a game studio with my close undergraduate friend, Brett Taylor, in the time that my regular job doesn’t consume,” Chris says.

He was the lead web and research developer at RiverSound Media Group, East Setauket, N.Y., before coming to Villanova.

His hobbies are practicing yoga, climbing rocks and playing guitar.