Making an Informed Decision for Election 2012

With the Presidential Election less than a month away, there’s no shortage of media coverage. Despite the chatter, it can be difficult to make a well informed and closely researched decision about whom to vote for. With that in mind, we’ve compiled a brief list of election resources. Behind each link you’ll find valuable information to help you strengthen your perspective and inform your vote when you finally hit the booths this November.

While the big two parties dominate the airwaves, don’t forget that a wide range of political perspectives are represented by plenty of candidates running for president in this year’s election. Here’s a list of a few major political parties in America along with their platform positions: 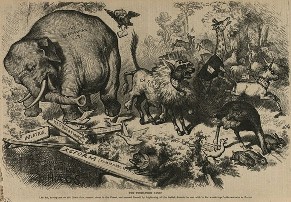 Thomas Nast's political cartoon, 1870 (courtesy of The Library of Congress)

The Democratic Socialists of America

Political polls are an invaluable resource during election season, both for political players and the average voter looking to follow the status of a given candidate.

Given this year’s contentious political atmosphere and the extraordinary speed of the contemporary news cycle, fact checking has emerged as a major media force in this year’s election. Check out some of the more reputable fact checking organizations after debates, and make sure to keep your candidate honest:

International news sources provide a valuable perspective on an election that doesn’t just affect the United States, but instead impacts the world at large.  Reading outside news sources can truly expand your thinking during this and other important elections.

BOOKS AND OTHER LIBRARY RESOURCES

Be aware that as a member of the Villanova University community you have unique access to a variety of library resources. Here are just a few relevant books from our collection:

The Rise of the President’s Permanent Campaign by Brendan J. Doherty

Who’s Counting? : How Fraudsters and Bureaucrats Put Your Vote at Risk by John Fund and Hans von Spakovsky

And finally, the following databases include article search engines to help you find information on a specific election topic: