Brill’s Encyclopedia of the First World War: Hot off the press and available at Falvey! 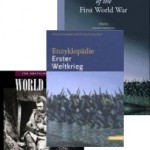 Although international in scope, the Encyclopedia overrepresents German individuals and organizations as is to be expected from a German language publication. The nine-pages long historiography essay focuses on (West-) German scholarship, but also references Anglo-Saxon and French contributions. A separate essay is dedicated to World War I scholarship in the former GDR.

The Encyclopedia’s subject index simply mirrors the A-Z list of entries and will disappoint the reader who expects detailed subject indexing. Chemical warfare and chemical weapons, for example, are not listed in the index although it would have been helpful to add a cross-reference to gas warfare. Unfortunately, the Encyclopedia is only available in print, but interested readers can compensate for the lack of a detailed index by referring to the full text search feature available for the German language copy on Google Books.

Can’t wait to get your hands on it? The print volumes of the Encyclopedia are shelved on the second floor of Falvey. Sample entries are available online on the publisher’s website. A detailed review of the German original is available on H-Net Reviews.