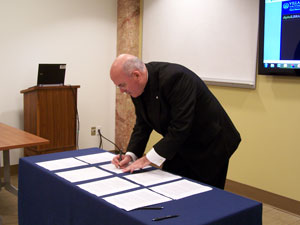 Russell W. Wylie, Thomas J. Lyons II and Louis N. Ferraro of the St. Anne Historical Committee attended the signing, as did Michael Foight, Special Collections and Digital Library coordinator, and Scholarly Outreach Librarian Darren G. Poley, a member of the Digital Library team. Poley was instrumental in arranging the partnership and the signing of the agreement, commenting that this is part of his “role as outreach librarian for Falvey.”

Founded in Kensington/Port Richmond in 1845, the parish is one of the oldest in the Archdiocese of Philadelphia. The cornerstone of the original church was laid on July 4, 1845. That church was replaced in 1870. Two cemeteries are adjacent to the church, which stands at the intersection of East Lehigh Avenue and Memphis Street. Two church histories to be digitized are A History of St. Anne’s Church, Philadelphia and St. Anne’s Church Philadelphia: One Hundred Years 1845 – 1945.

Ferraro displayed the Civil War era cemetery register with its brittle pages. The register will be digitized so that its records will be more accessible while the fragile hand-written original book is preserved. Ferraro explained that the ledger is organized by plot numbers and indexed by the plot owner’s name, not by those buried in the plot. He said that the committee is still trying to match plot numbers listed in the text with the actual plots because some graves were moved when the new church was built in 1870. According to Ferraro, the ledger shows when a grave was sunk and re-sunk. A grave might be re-sunk when the title holder decided to buy more plots. A coffin would be exhumed and the hole dug deeper to accommodate more coffins. In some cases there are four children buried on one level. Some plots contain nine or ten vertical graves. The register states when a plot is full or “only has room for a baby.”

Father Brady formed the St. Anne Historical Committee (SAHC), a diverse group of individuals who share an interest in their Irish heritage and in American history. In addition to Father Brady, Wylie and Lyons, committee members are Cormac J. Brady, Claire A. Gardner, Kenneth Milano, Drew Monaghan and J. Thomas Showler. After studying the cemetery records, the committee plans to examine and record the actual headstones in the two cemeteries. The digitized cemetery records will facilitate the committee’s study while protecting the fragile original pages.