The Falvey Scholars Award was established in 2002 by Joseph P. Lucia, University librarian and library director. Lucia collaborated with the honors program and the Center for Undergraduate Research and Fellowships to establish the award. This annual program, according to Lucia, serves “to recognize and reward exceptional undergraduate research.” 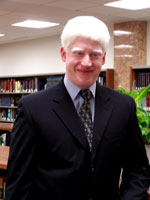 Casey Burkhardt (Computer Science), delivered the first presentation: “The Trajectory to the ‘Technological Singularity.'” Singularity, Casey explained, is “a point at which technology surpasses the abilities of the human brain.” He also discussed the ethical component and social responsibility related to such technological pursuits. Casey’s faculty mentor, William Fleischman, PhD, could not attend. Joe Lucia read Dr. Fleischman’s introduction in his stead. 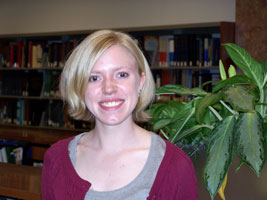 Theresa Donohoe (English), the next presenter, discussed “Nature, Culture, and Gender in Gardens of Middle English Poetry.” Focusing on “The Pearl,” an anonymous fourteenth century poem, Theresa studied a manuscript from the British Library in researching the treatment of nature and of women in the poem. She cited other fourteenth century texts—”The Book of the Duchess,” “The Knight’s Tale,” and “The Merchant’s Tale” by Chaucer—in her presentation, reciting some passages in middle English. Theresa’s faculty mentor was Alice Dailey, PhD. 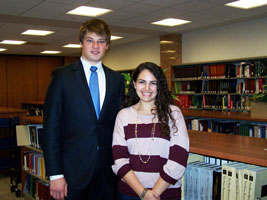 Mark Reimlinger, Emily Battinelli, and Frank Anuszewski (in absentia) (Electrical Engineering), discussed their project: “Microstructured Optical Fibers for Environmental Sensing.” Mark’s work on this project, which he had begun in March of 2010, involves measuring the absorption of light so precisely as to detect, for example, chemical agents. Emily stated that this technique could also be used to detect types of antibodies, indicating the presence of certain diseases. Rosalind Wynne, PhD, served as the team’s faculty mentor. 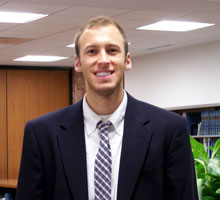 Matthew Hemmerle (Economics) showed how a country’s dependence on oil affects its economy and its political system: “Manufacturing Institutional Quality: The Impact of Dutch Disease on Governance in Oil Dependent Countries.” In researching dozens of oil-dependent countries, Matthew studied how such countries’ oil sectors may negatively impact their manufacturing sectors. Matthew integrated his experiences studying in Jordan and visiting Cambodia on a service trip into his research. His faculty mentor was Mary Kelly, PhD. 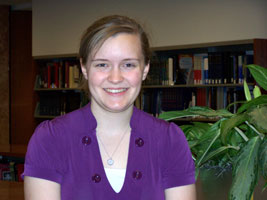 Hillary Dutton (Nursing), the event’s final presenter, delivered “Electronic Aggression in Adolescents: The Current State of the Science.” Cyber-bullying, Hillary explained, exceeds the boundaries of traditional bullying, following its target into his/her home and even the bedroom. And if the bullying doesn’t originate from a school computer, she continued, the school can’t intervene. Her faculty mentor, Elizabeth Dowdell, PhD, described Hillary as “a really strong and independent soul.”

The Rev. Peter M. Donohue, OSA, PhD, ’75 A&S, president of Villanova University, spoke next. In the context of faculty’s responsibility to build knowledge, Father Peter asserted that the University’s “students are also contributing to that knowledge.” He also recognized the service of the faculty mentors who supported the Falvey Scholars.

During the luncheon that immediately followed, attendees remarked on the timeliness of the Scholars’ topics, their professionalism—both in presenting their research and in responding to the audience’s questions, and the thoughtful questions posed by student attendees.

Special thanks to Gina Duffy, library events and program coordinator, and her team for posting online announcements; for setting up the chairs, tables, computers (for the presenters) and the display screen; and for organizing the refreshments. Special thanks also go to the library’s graphic designer, Joanne Quinn, who created the display window on the first floor, celebrating the Falvey Scholars and the tenth anniversary of this event.