Confessions of a Self-Check-Out Addict 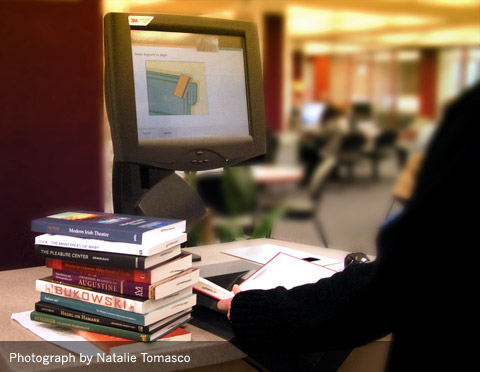 Intrigued by an article that appeared in the October 2008 Rolling Stone Magazine by David Lipsky about the life of the novelist David Foster Wallace, I decided to check out one of Wallace’s books. I was looking forward to having some extra reading time over the long Thanksgiving weekend, and Lipsky’s description of Wallace’s life, works and early death were enticing.

I was late leaving work that Tuesday night but made a quick trip to Falvey’s fourth floor to retrieve Wallace’s The Broom of the System (PS3573 .A425635 B7) and, on a whim, Girl with Curious Hair (PS3573 .A425635 G5).  I was especially interested in reading The Broom of the System (named after a saying from Wallace’s grandmother about the benefits of eating an apple) because Wallace had written it in 1984 to fulfill a thesis requirement for graduation from Amherst College, and it was good enough to be published as a novel in 1987. I also knew Wallace had written this following a period of depression that had caused him to withdraw from school to be institutionalized for a while.

I took the books to the first floor circulation counter, hoping not to have to wait since I was already late for a scheduled appointment. There were seven people ahead of me, doing things like checking out laptops, requesting study rooms, asking for help with microfilm and even checking out books needed to complete assignments over the long holiday weekend. I almost put my books on the counter, prepared to leave empty handed, when I spotted the Self-Check machine. Wildcard in hand, I proceeded to the machine to see if I could save some time.

One quick swipe of my Wildcard identified me as an authorized borrower. Following the instructions, I opened the back cover of each book and ran the barcode under the red light.

Presto! My books were checked out and the security strips desensitized.

I pressed the button on the touch screen and a receipt immediately printed. I was hooked on this machine! In an instant I was out the door, books in hand, with just enough time to make my appointment.

As it turns out, I read the first chapter of The Broom of the System and totally connected with the characters. Lenore Beadsman, the main character, and the rest of the girls from Mt. Holyoke brought me into their dorm room and included me as one of them. I was sure that I had found a writer who would keep me reading for a long time, but, for some reason, I couldn’t get past the next several chapters. As it turns out, there is an underlying sadness in Wallace’s writing, a sadness that comes from seeing how difficult people can be, that made it hard for me to continue.

(This article is being reprinted with permission of the author. During renovations, the Self-Check station had to be moved and can now be found across from the main circulation desk on the first floor.)