“The Voice of the Student Body": We Celebrate over 100 Years of The Villanovan, Now Available Online 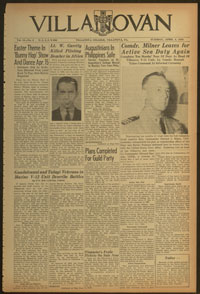 1944 issue of the Villanovan

Falvey Memorial Library recently completed a major digitization project to make available online all 1,713 issues of the campus newspaper, The Villanovan, published between 1893 and 1995. On Feb. 23, the Library hosted a program to celebrate this accomplishment. The celebration was dedicated to the memory of longtime Villanovan faculty adviser, June Lytel-Murphy.

Prior to 2011, The Villanovan was available only through bound volumes of issues or microfilm—neither providing an especially pleasurable experience for casual perusal. The scanning was performed by Internet Archive, a non-profit foundation creating an online library of all sorts of public domain documents. However, the returned files had some technical problems requiring some attention from staff here, especially regarding the OCR (optical character recognition—an important prerequisite for full text searching). Ottignon also provided subject access for each issue, adding that the project gave a great opportunity to see the social side of the University. 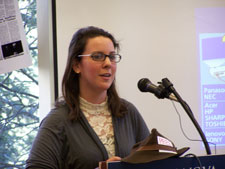 Next to speak was Kendra Davis, a current co-editor in chief of the newspaper, who remarked she had already used the digitized Villanovan in two class assignments. She described the current process for assembling the paper, from the initial meeting to determine the size of each section for a particular issue to the three rounds of editing an issue undergoes before it is sent to the printer.

Furthermore, according to Davis, The Villanovan has been available online for about seven years now, currently with over 9,000 subscribers, and the staff is working on creating a mobile app. Davis also stated her amazement that some students insist nothing ever happens on campus; from her perspective there is always something going on at Villanova! 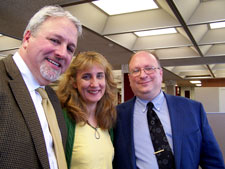 The celebration concluded with a panel discussion of former editors of The Villanovan: Kate Szumanski ’95 ’97,  Marianne Lavelle ’80 A&S, Larry Goanos ’84 A&S and Jim DeLorenzo ’84 A&S. They discussed memories of working on the newspaper. Lavelle spoke of how special she felt to be “a small part of something so big.” Goanos described his very first reporting assignment on The Villanovan—interviewing Howie Long after a football game. Long became an NFL Hall of Fame player and media commentator.

And DeLorenzo told of covering the dropping of and later renewal of the University’s football program during his time on the paper—including many times talking to former University President the Rev. John M. Driscoll, OSA, PhD to “set the record straight.”

All three also reminisced of working with Professor Lytel-Murphy, the faculty adviser for the paper when they worked on it. Stephen Spatz, assistant outreach & research librarian, facilitated that discussion.

The Celebration program was organized by Gina McFadden and Joanne Quinn, with assistance from David Burke and Foight.

The full text of The Villanovan is searchable through the library catalog for the years 1893-1995, and also through the Digital Library’s Villanovan section. The library Digital Projects team plans to add the subsequent years in the future. In the meantime, selected content for post-1995 issues can be found by the Villanova University community in the Lexis/Nexis database