Looking for something new to read over spring break, maybe a comedy? The library catalog offers so many award-winning titles of contemporary fiction, you may have trouble deciding.

, now appearing in many books’ catalog records, can help you decide. This new feature connects you to a summary, reviews and other useful information about a particular book.

Damned: Life Is Short, Death Is Forever by Chuck Palahniuk

The Lonely Polygamist by Brady Udall

In the Name of Salomé by Julia Alvarez

The Girl in the Blue Beret by Bobbie Ann Mason

Stories set in the United States:

Salvage the Bones by Jesmyn Ward

Where the Line Bleeds by Jesmyn Ward

Stories set in other countries:

The Tremor of Forgery by Patricia Highsmith

Oil on Water by Helon Habila

Luka and the Fire of Life by Salman Rushdie

Zone One by Colson Whitehead

A Tomb on the Periphery by John Domini

There Is No Year by Blake Butler

The Privileges by Jonathan Dee

Something to Tell You by Hanif Kureishi

The Pale King: an Unfinished Novel by David Foster Wallace

The Passages of H.M.:  a Novel of Herman Melville by Jay Parini

The Black Album; with, “My son the fanatic” and a Short Story by Hanif Kureishi

Before the End, After the Beginning by Dagoberto Gilb

Before You Suffocate Your Own Fool Self by Danielle Evans

Read the fiction and poetry of the writers featured in the 14th annual Villanova Literary Festival:

The Odyssey: a Graphic Novel

Such graphic novels may help you apprehend a story and its characters before you delve into the original texts. They may also provide an uncommon perspective by emphasizing certain elements of a story.

Guides that use the graphic-novel format to explain complex, scientific topics:

The Manga Guide to Biochemistry

The Manga Guide to Relativity

The Manga Guide to the Universe

Here is one search strategy to help you find addition titles:

1. From the library home page, click the “Search” tab.

2. Click on Books & More and then the Advanced Search link.

3. Fill in the fields as indicated below. This will provide a list of titles ordered for the English department in 2011 that have the word Novel in the title and Fiction as a Subject. Some, but not all, will be recent novels added to the library. Insert Stories instead of Novel for short story collections. 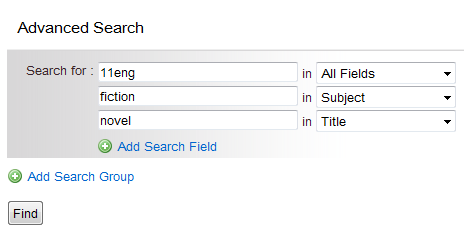 Substitute “12eng” for the first term to obtain a list of titles ordered for the English department in 2012.

And please, let us know in the “Comments” below what new fiction you would like us to order.