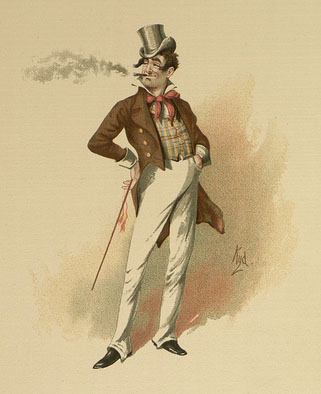 Dick Swiveller from The Old Curiosity Shop,
The characters of Charles Dickens, p. 15.

You can easily find a lot more information about Charles Dickens by searching the web. Here are just a few of the interesting things I found.

Dickens 2012 has information on the celebrations and exhibitions going on around the world.

The Morgan Library has a “Charles Dickens at 200” exhibit, which you can see part of online. The online exhibit includes the manuscript copy of A Christmas Carol as well as a selection of letters.

“Dickens in Context”, from the British Library, offers resources for understanding the themes of Dickens’s works. It also includes video discussions and complementary manuscripts, newspapers, and other items to “help students open up the social, cultural and political context in which Dickens was writing.”

If you have an iPhone or iPad, check out “Dickens Dark London” for a glimpse of London through Dickens’s eyes. This app is “an interactive graphic novel conducted by the Museum of London based on Sketches by Boz.” Text with audio and shadowy illustrations set the scene, while a map of London lets you see how the streets have changed between 1862 and now. The first issue is free; subsequent issues will be available each month for a small fee.