Chaos Unveiled: New Exhibit on the Origins of Villanova University

When I was presented with the opportunity to curate an online exhibition as the Fall 2011 Digital Library Intern I jumped at the chance. Through the course of my internship I had grown more familiar with the wealth of materials in the Digital Library and I was eager to explore one area in particular: materials related to rioting that occurred in Philadelphia in 1844. Before seeing the items I knew nothing about the riots which was surprising to me because I had grown up in the area and lived in Philadelphia for a number of years. After conducting a little more research I was amazed at the history of the riots and wondered how many people in the area were like me and unaware that the riots had happened. I thought the story of the riots were an important one to share and now it is my pleasure to present to you Chaos in the Streets: The Philadelphia Riots of 1844. 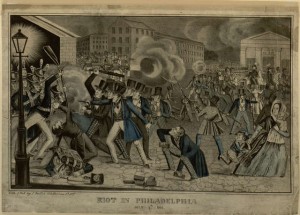 Philadelphia in 1844 was a hotbed of religious and ethnic prejudice, most notably toward Catholics and the Irish. This was representative of a national sentiment and the exhibition looks at a group called the Nativists, who later became the Know Nothing Party, and their role in the rioting. In May and July of 1844 these issues came to a breaking point and the city of Philadelphia saw some of its most violent days in her history. The riots would ultimately have many lasting effects and it can be said that the Philadelphia you see today is partially a result of those violent days.

The Digital Library provides access to quite a large collection relating to the riots including a collection of letters from Morton McMichael who was the sheriff at the time. His letters and personal journal provide a first-hand account of what it was to be like on the streets of Philadelphia in the mid 1840’s. Only a small portion of his entire collection is utilized in the exhibit and so I recommend taking a longer look at the letters as they offer a fascinating window into policing in Philadelphia during that time. 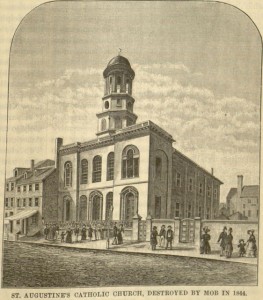 There was no shortage of interesting material on the riots but one aspect that proved especially dramatic to me was the role the Catholic Churches had in the rioting, particularly St. Augustine’s Church. I had visited the church many years ago in the Old City section of Philadelphia and walked by it countless times. What I did not know is that the St. Augustine’s I saw today was rebuilt from the one that had burned down during the rioting. Sadly, along with the burning of the church, a library containing an invaluable collection of theological materials was also destroyed. Imagine my amazement when I found out some of the books from that library ended up in Special Collections in Falvey Library! You will find in the exhibition how the Augustinian community in Philadelphia put major roots down in both center city Philadelphia and, of course, Villanova University. I hope you find the connection, and how it relates to the riots, as interesting as I do.

Finally, I would like to thank Michael Foight and Laura Bang for their valuable guidance, Joanne Quinn for the graphics, Susan Connor, Susan Ottignon, and Chelsea Payne for their informative transcription work, and David Lacy for his work on technical details. Without them the exhibition would never have come to fruition.