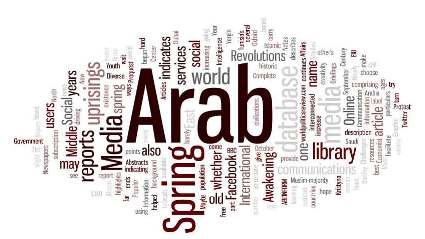 By Merrill Stein and Kristyna Carroll

The Arab Spring may be, as Rami G. Khouri called it when visiting campus this September, an “Arab Awakening.” How far the spring awakening has come and where it’s going is still under consideration.

For some background, try one of the library subscription services. The Columbia International Affairs Online (CIAO) database has several “Popular Protest in North Africa and the Middle East” reports.

Use the Oxford Islamic Studies Online database for information and reports about “The New Social Media and the Arab Spring” or “Saudi Arabia: Challenges for the 21st Century.”

Articles in Proquest Newspapers ask whether the Arab spring will have an Indian summer or whether “This “Arab Spring” could turn into an “Arab Year” that the whole world can celebrate together.” In the Communication & Mass Media Complete database, an article about “Media and the Arab uprisings of 2011: Research Notes” describes ten different ways that media and communications resisted the Arab uprisings of 2011 and how “some have been so bold as to label [these events] as the ‘Twitter Revolutions’ or ‘Facebook Revolutions.’”

In learning about the Arab Spring two particulars emerge: age and media.  An article in the ABI/INFORM database highlights that “Nearly 30% of the population in Muslim-majority countries is between 15 and 29 years old. …  The social media that helped facilitate the Arab Spring Awakening is in no small part driving a historic transition from a world comprising many pockets of civilizations barely aware of each others existence to a digitally interconnected world.”

The second Arab Social Media Report from the Dubai School of Government indicates “Youth (between the ages of 15 and 29) make up around 70% of Facebook users in the Arab region, indicating a slight increase in the number of users over 30 years old since the end of 2010.”

What other resources would you recommend?