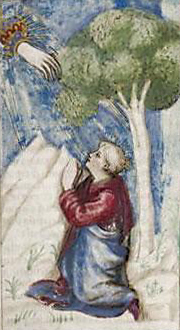 Coordinating with the campus community’s marathon reading of the Confessions on November 7, Bente Polites, Special Collections librarian, has mounted a small exhibit of the early editions of Saint Augustine from Special Collections.

Housed in two glass cases on Falvey’s first floor, the first case features four small books and one large one, all published in the 16th century in various places: Dillingen (1659), Cologne (1569),  Louvain (1573), Rome (1589) and Würtzburg (1581). The four small Confessions are opened to their illustrated title pages; the large central volume displays text only.

The second case houses three 17th century editions and one unusual volume published in 1900. The three works from the 1600s are opened; two have illustrated title pages.

The larger volume of Confessions is one of 400 limited-edition copies published in London by Kegan Paul, Trench Trübner & Co. Ltd. Falvey’s copy is number 227. Its decorative cover, which includes gold leaf and inlaid mother-of-pearl and was designed by Cedric Chivers (1853-1929), is made with vellucent, a process invented by Chivers. The book cover was painted on paper which was then covered with very thin vellum, or calfskin.

This exhibit will remain on display throughout November.