"The Open House was a neat idea!" Winners of the iPad, Kindle and Nook

Three very happy students, the winners of the Open House drawing, recently met with University Librarian Joe Lucia and Instructional Services Librarian Barbara Quintiliano.  Four hundred students attended the Open House on Sept. 13 and 14 and, by completing a simple project to familiarize themselves with the library catalog, entered the drawing for one of the prizes: an iPad, a Kindle or a Nook. 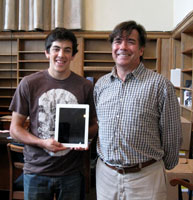 Nick Pajerowski, a first-year mechanical engineering major from Annapolis, Md., won the grand prize: an iPad. “I was so stoked when I found out I won the iPad! It’s such a cool gadget, and it’ll definitely be useful for studying … and for Angry Birds,” Pajerowski said. He told his father he was going to take it apart. Engineers are curious people! 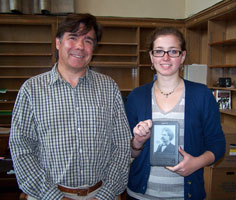 Abigail Demke, a first-year student from West Hartford, Conn., won the Kindle. Demke commented, “I was incredibly surprised to win … I was certain I would be disqualified because on the raffle form I wrote that I am too old-fashioned to read books on a screen… Even though I love books with pages, I am very excited to see if e-books are right for me. So far, I love how small and convenient it is, and I think it’ll be great for train rides home. Many thanks to the staff at the Library; the Open House was a neat idea.” 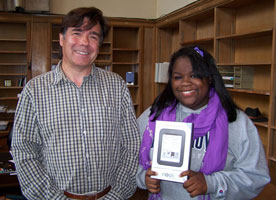 Lynnea Greene, a political science major from Philadelphia, won the Nook. She noted that her mother “has been trying to buy me an e-reader for so long, and I’ve always told her no. But winning the Nook has made me see the error of my ways. I love it and really appreciate it. Thanks so much!”

Students also visited the “petting zoo” where they could try out the iPad, Kindle and Nook. Snacks and handouts were available to visitors. And each day the first 100 registered Villanova student attendants received USB thumb drives.

Quintiliano and her committee planned the Open House.

Article and photographs by Alice Bampton