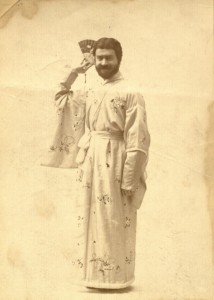 The papers of Howard Merrill Shelley, noted 20th century Philadelphian and playwright, are now being digitized and made available online through the Digital Library.  In addition to being a figure of the Philadelphia theater world, Shelley (1879-1956) was also descended from historic and famous inhabitants of the area, including David Rittenhouse and Benjamin Franklin.

The Digital Library’s Fall 2011 Intern, Karla Irwin, introduces readers to Howard Shelley and his illustrious family history, on the Blue Electrode blog. “Digitizing the Howard Shelley Collection,” she writes, “has been like working on a miniature time capsule of Philadelphia genealogy and theater history.”