"A rather dark perspective on empire": Dr. Elizabeth Kolsky speaks on colonial India 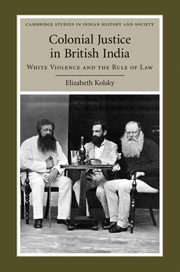 For Elizabeth Kolsky, PhD, colonial India may be a thing of the past, but understanding its history is still a timely endeavor. “In the post-9/11 era,” she says, “American politicians have debated whether the US is or should be an empire modeled on the British. I think this stems from an inaccurate and romanticized understanding of what colonialism is all about.”

Her recently published book, Colonial Justice in British India: White Violence and the Rule of Law, works to counter this romanticized view. “My book presents a rather dark perspective on empire that seeks to correct the historical record by bringing to light what I call an open secret: namely, the intrinsic violence of empire.”

Dr. Kolsky, an associate professor of History, is set to kick off this year’s Scholarship@Villanova lecture series, speaking about her book on Monday, Sept. 26, 2011, at 1:30 p.m. in the library first floor lounge.

“My interest in India was my destiny,” she says, and it stems from two sources. The first was a study abroad experience in the country, during her junior year as an undergraduate at Columbia University.

The second, she explains, dates back to the day she was born, though she didn’t discover it until many years later, while already pursuing a PhD in South Asian history.  “Perusing my parents’ books, I found a small book that my mother had given my father on the date of my birth titled Indian Love Poems. The book was inscribed by her, ‘To My Dearest Husband, Now we have someone to share our love with.’ So although I did not know it when I first went to India, I was destined from birth to love India – and I still do.”

Dr. Kolsky also credits her time at Columbia University, “during the rise of postcolonial studies when theoretical luminaries such as Edward Said and Gayatri Spivak trailblazed whole new areas of research in the study of formerly colonized societies,” as inspiring her specific interest in the colonial period in India.

Colonial Justice in British India (Cambridge University Press) is her first book, and she calls the time she spent writing it “long, laborious and wonderful.”  It involved14 years of work, “numerous trips to the Indian subcontinent and to London for archival research,” in addition to presentations “at conferences, workshops and seminars around the world and sharing my written and unwritten thoughts with mentors, colleagues and friends.”

“In the process of writing a book,” Dr. Kolsky says, “I learned how to write a book and I very much look forward to producing my next one.”

This event is free and open to the public, and is approved for Augustine and Culture Seminar (ACS) co-curricular event credit.  A book sale and signing will follow the talk.