This summer, the Digital Library secured an exciting partnership with the William B. Eerdmans Publishing Company, the publishers of Augustine through the Ages. This encyclopedia is the single most-accessed item in Falvey’s Special Collections. With renovations now underway on Falvey’s second floor, the Special Collections reading room has temporarily closed, but its most popular book is now more accessible than ever.

Below, in his own words, Augustine through the Ages editor Father Allan Fitzgerald, OSA, PhD, describes this landmark partnership and its benefit for students, faculty and other members of the Villanova University community:

“Augustine through the Ages presents the life, work and influence of Augustine of Hippo (A.D. 354-430), one of the greatest figures in the history of the Christian church. Few figures in history are so great in their own time and so lastingly influential that they can stand being made the subject of an encyclopedia of over 950 pages. 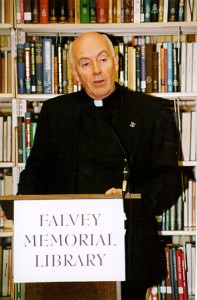 Fr. Allan Fitzgerald discusses the creation of "Augustine Through the Ages" at a Falvey Faculty Book Talk, Sept. 20, 1999

This book is now available in the Villanova Digital Library for members of the Villanova University community – thanks to an agreement with William Eerdmans Publishing. It is the first full encyclopedic handling of the thought and influence of Saint Augustine of Hippo, a much-needed reference for this major patristic figure in the development of Western religious thought. About 150 scholars have supplied almost 500 articles. Each article is signed and contain bibliographies for both older and more recent scholarship.

This book is organized and functions as an encyclopedia. The digital version is searchable, whether one is seeking individual words or entry headings (upper case). The book also includes tables of Saint Augustine’s works which show Latin titles, English translations, common abbreviations and dates.

Three reasons why this encyclopedia is so valuable can be listed:

1. It contains articles by the best Augustine scholars from both the Catholic and Protestant ranks, allowing for an evaluation of Saint Augustine’s contribution to the history of Western Christianity.

2. It is a useful overview of the various categories of Saint Augustine’s thought.

3. It includes articles on many areas of Saint Augustine’s thought: biblical, theological, philosophical, ethical, historical and his many literary works.“

This online version of Augustine through the Ages is the first item in a new collection called the Saint Augustine Reference Library, a set of materials of Saint Augustine scholarship which is jointly sponsored by the Augustinian Institute and Falvey Memorial Library.

Augustine through the Ages, also available in print, is in both the Falvey collection and the Augustinian Historical Institute collection.