The book documents the authors’ own experiences of a turbulent time in African history when 10 men chose a non-violent approach as a means of creating change and seeking independence. In particular, it emphasizes the role that Christianity played in the actions of the men. 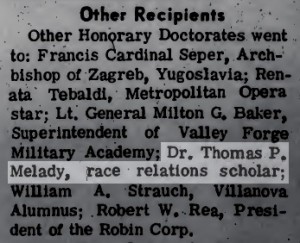 This isn’t Ambassador Melady’s  first visit to the University; on May 16, 1966, he was awarded an Honorary Doctorate during Commencement.

Since then, he served as an American ambassador under three presidents and as a sub-cabinet officer for a fourth, and remains active in foreign affairs and international relations. He was appointed Ambassador to Burundi in 1969, Senior Advisor to the U.S. delegation to the UN General Assembly in 1970, and Ambassador to Uganda from 1972 to 1973. In 1989 he was appointed Ambassador Extraordinary and Plenipotentiary of the United States of America to the Holy See. Since 2002, he is Senior Diplomat in residence at The Institute of World Politics in Washington, D.C.

Dr. Margaret Badum Melady served as president of The American University of Rome from 1997 to 2003. Dr. Melady is a former member of the faculties of St. Joseph’s University in Philadelphia, Sacred Heart University, Fairfield, Conn., and the State University of New York in Oswego. She was the first woman promoted to an executive position in public affairs at Stauffer Chemical Company, where she worked in both public relations and governmental affairs. Her most current position is Vice Chairman of the Board of Trustees, Catholic Distance University.

This event is free and open to the public. A book sale and signing will follow the presentation.