Friday Film Review: It's Kind of a Funny Story 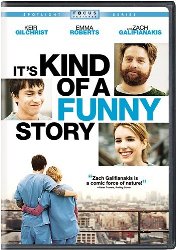 The last few reviews have been about films I recommend you watch. You don’t have to watch this one. For a film that tries to be a drama and a comedy, It’s Kind of a Funny Story (based on a novel) is actually a group of characters who tell one bad, awkward joke after another. Other reviewers have compared this film to One Flew Over the Cuckoo’s Nest, perhaps because it takes place in a mental ward, but I refuse to allow the film I’m reviewing to share the same sentence with an Oscar winner.

The movie starts off with Craig (Keir Gilchrist), a troubled teen who contemplates suicide and who faces problems that all teens face. He decides to check himself into a mental ward. Due to construction he has to stay in the adult section. This is where Craig meets fellow patient, Bobby (Zach Galifianakis), who gives him fatherly advice that he never got at home. Quick note on Zach, I don’t think there’s been an actor in history who made one hit movie and who then went on to make only horrible ones. Because of a weird rule, Craig has to stay in the psychiatric ward for five days (even though the only thing I see wrong with him is that he has crappy friends). Love interests, moral stories and real friends may have framed the film, but the result was disappointing.

The real problem with this film, aside from it not being funny, is that it miraculously takes place over the course of five days. This kid manages to get over his problems, find a girlfriend, reconcile the relationship with his parents, make life long friends and completely change the lives of the patients in the ward! The plot holes and bad acting make it easy for me to suggest you skip this movie and watch One Flew Over the Cuckoo’s Nest instead.

(You may not necessarily want to borrow this film, but our other videotapes & DVDs circulate to Villanova faculty, staff and students for a period of 7 days.)