A beachy summer in the digital library

Though the school year has been over for nearly two months, summer only officially began last week, on June 21.  The season of beach visits and beach reads has truly begun.

Summer vacation at the beach is hardly a recent cultural development.  Families have been going “down the shore” for at least 150 years, to prime oceanside destinations such as Atlantic City, New Jersey.  The first hotel commercial hotel built in the vacation hotspot appeared in 1853, and since then, visitors have been making the trek, by rail and road, in droves.

Joseph McGarrity, whose personal papers can be found in Special Collections, visited Atlantic City with his family sometime around the turn of the 20th century, and had their photograph taken on the beach.  (A caption for the photo can be found here.) 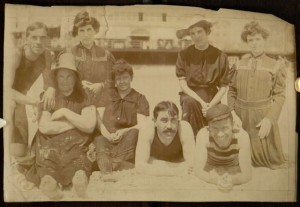 In the Sherman-Thackara collection, an 1865 photograph shows five Naval midshipmen on the beach, probably at the Naval Academy in Annapolis, Maryland.  Though not on vacation, the five men nonetheless strike a casual pose on the sandy shore. 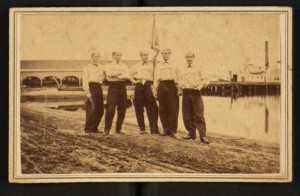 American beaches aren’t the only ones on display in the Digital Library, either.  Jack Butler Yeats drew images of the Irish coast, including the one below. 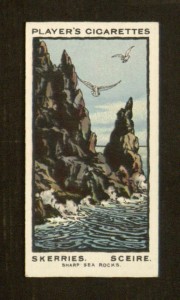 The small card, an advertisement for Player’s Cigarettes, contains an explanation of the Irish word sceire (skerries) on the back. 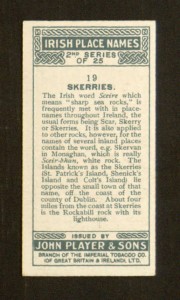 The ocean is an important image in Irish travel writing and poetry as well.  Rambles on the Irish Coast by William Hellier Baily not only explores the beach from a factual perspective, but it also includes excerpts like the following, from “The Cromlech on Howth” by Samuel Ferguson:

“They heaved the stone; they heaped the cairn;”
Said Ossian, “In a queenly grave
We leave her, ‘mong her fields of fern,
Between the cliff and wave.
The cliff behind stands clear and bare,
And bare above, the heathery steep
Scales the blue heaven’s expanse to where
The Danaan druids sleep.
And all the sands that, lest and right,
The grassy isthmns ridge confine,
In yellow bars lie bare and bright
among the sparkling brine.”

This small tour through the Digital Library’s beachy materials has only whetted (get it?) our appetite for a day at the ocean, whether it be down the shore like the McGarrity family or further afield, rambling on the Irish coast.