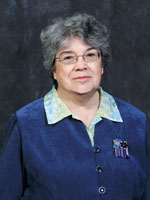 Over the years, Jackie Mirabile has won the respect and affection of her colleagues for her expertise, conscientiousness and affability. Falvey Memorial Library’s team leader for information and research assistance, Jackie retired at the end of May after almost 30 years of exemplary service.

Born and raised in Vermont, Jackie majored in history with a minor in mathematics at Trinity College, Burlington. After earning her master’s in library science from Simmons College, she was offered positions both in Detroit and Philadelphia. Fortunately for us, Jackie decided to come to Philly where she worked a total of nine years at the Free Library of Philadelphia and then several more years at a regional patent company. In 1982 Jackie was hired as Falvey’s second full-time reference librarian by then head of reference Louise Green, who became her close colleague and who recently retired in 2009.

During an era of sweeping changes in academic libraries, Jackie is unsurpassed in the art of information retrieval whether using no-baud print, 500-baud Telex, or broadband Internet. Uncle Sam owes her a debt of gratitude as well for her competent management and thorough knowledge of U.S. government documents. According to Jackie, “the real effort to provide service” is the one thing that has remained constant throughout the evolution of her profession, and her favorite aspect of the job is still “finding what the patron wants” — something all librarians know well as the love of the hunt.

She served as the librarian liaison to the psychology and education and human resource departments and taught research strategy sessions in a variety of disciplines.

Jackie has also served on Falvey’s Management Policy Group (MPG) and Communication team, and in previous years on the University-wide Villanova Quality Improvement (VQI). Colleague and information specialist Donna Chadderton is grateful to Jackie for patiently teaching her “how to do better reference work” and will miss “her friendly, ever-present smile, her commitment to her work and the knowledge that I could count on her for help.” Fellow Scrabble player Luisa Cywinski bows in homage to Jackie as the undefeated “Queen of Scrabble.”