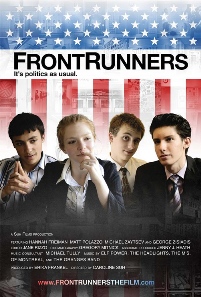 What happens when you get the richest, smartest kids in the country to run for their high school’s student union? Directed by Caroline Suh, Frontrunners follows the students of Stuyvesant High School in New York where only the top 3% of students get in and where the measuring stick isn’t if you go to college but what Ivy League school you attend. The film follows four candidates that are vying for the coveted Stuyvesant Student Union President (who controls a $40,000 budget).

It’s actually more engaging than it sounds mainly because of the affluent nature of the high school (televised debates!) and the pompous personalities. The film does raise some interesting questions about society and education. Is this event educational or does it further perpetuate our problems with the political system by breeding this type of behavior? (In the film there are political teams, newspaper endorsements and a primary.)

I found myself asking “does this even belong in a high school?” Even with all of the contention the film overall feels flat. You may find yourself asking “why do I even care?” The film fails to really connect with its audience, which is unfortunate because we have all gone through this in our school days. Ultimately this film is worth a look if you have nothing else to watch or you’re interested in education.