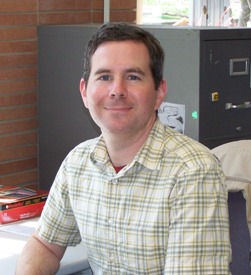 Originally from Glenelg, Md., Jesse graduated from West Chester University with a bachelor’s degree in anthropology. He then moved to Athens, Ga., where he worked in the interlibrary loan department at the University of Georgia Libraries. Jesse hopes to obtain a master of library and information science degree in the near future.

His interests include a wide variety of music, film and food (both cooking and sampling new cuisine). One of his favorite dining spots is the Helmand, an Afghani restaurant in Baltimore, Md. Jesse began playing guitar at age eight and has played in many bands over the years – “some loud, some quiet.”

Jesse currently lives in Wynnewood with his wife and their two-year-old daughter and is looking forward to reconnecting with the Pennsylvania area.

Luisa Cywinski, Access Services team leader, commented that “Jesse comes to us with thirteen years of interlibrary loan experience that will lend itself to our operations.”

Article and photograph by Alice Bampton