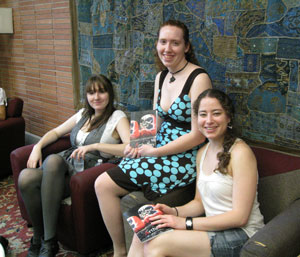 Dr. Sewell introduced Christina Hansen, editor in chief of Arthology—one of Villanova University’s student literary-art magazines.  The magazine’s release party coincided with the Open Mic event, and copies of the magazine were available to all present. Arthology contributors read their work, beginning with Christina and her poem, “Earshot.” 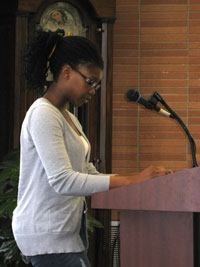 Brittany Walker stepped up to the microphone next and offered “What’s Love Got to Do with It?” Mike Mo shared “Another Drive.” And Alexandra Edwards read “Because a Girl Is Not a Tree,” which has been published in Arthology.

Special thanks go to Regina McFadden and the staff of the Library’s Programming & Outreach team for providing the chairs, tables for refreshments and for Arthology, and the microphone.