New Online Exhibit: Torn Between Brothers: A Look at the Internal Divisions that Weakened the Fenian Brotherhood

I had no doubt in my mind when I began to work on an online exhibit for Villanova’s Digital Library that the online content of the Fenian Brotherhood  collection would prove full of interesting pieces of 19th century military history.  Villanova’s Digital Library houses over 450 items for the American Catholic Historical Society that relate to the Fenian Brotherhood’s failed invasions of Canada.  I was caught off guard by the evidence of dramatic divisions and personal quarrels that plagued the Irish American organization and so I chose to highlight those along with the Fenian Brotherhood’s efforts to defy British rule.

When the Irish Revolutionary Brotherhood fought overseas for an independent Ireland they sponsored an organization called the Fenian Brotherhood in the United States.  Originally intended to raise funds and materials for activism on Irish soil, the leaders of the Fenian Brotherhood surprised many with their repeated hostilities against British North America.  The first leader to propose attacks on Canada reasoned that they would create problems for Britain, but as the aggressive plan divided Fenian membership in two, subsequent military actions seemed more congruent with the desires of Fenian leaders to assert their authority over rivaling factions. 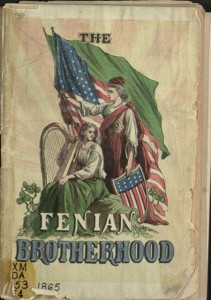 The letters and published circulars of Villanova’s Digital Library collection tell the story of several of these factions and their efforts to win authority over the membership as a whole.  Amidst preparations for military attacks leaders accused each other of mishandling the treasury, illegally printing bonds, and even resorting to violence against a fellow Fenian Brother.  The majority of the papers highlighted in this collection and exhibit come from Fenian Senator Frank Gallagher of Buffalo, New York.  Because he engaged in correspondence with members of multiple factions over a period of several years, Gallagher’s papers show the efforts of many to sway his personal opinions and allegiance. 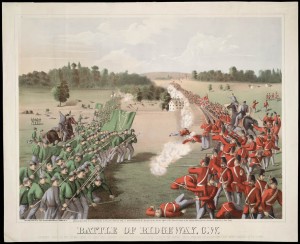 Check out the online exhibit to follow the Fenian Brotherhood through its inception, three failed invasions of Canadian soil, one murderous plot to cover up inconsistencies in their treasury, and many schisms in the membership until the organization finally discontinued itself in 1886.

Curated by Jean Turner (Digital Library Intern Spring 2011), with graphic design by Joanne Quinn.  Additional and indispensable  contributions to the project were made by student scanners and several transcribers including Susan Ottignon and Mimi DiLenge; David Lacy for his work on the technical details; and Laura Bang and Michael Foight for their advice and guidance.