Connecting the shards of history

Finding and making available lost or hidden treasures from collections is one of the greatest satisfactions in working with heritage materials.   In processing collections for digitization one occasionally finds materials that don’t seem to fit with the other materials in a collection, especially when dealing with a partner’s materials that may not have been fully described in paper prior to the digitization. 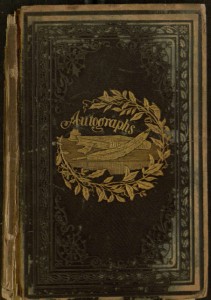 I was quite shocked and amazed when in the box of the Eleanor C. Donnelly personal paper collection, which is owned by the American Catholic Historical Society, Villanova University’s first digitization partner, I found a bound volume that she had owned that didn’t fit with the remainder of the materials, which largely contained correspondence to and from Eleanor, primarily from priests and Bishops throughout the United States in answer to her requests for facsimiles of episcopal seals.  Eleanor Donnelly, who lived from  1838 to 1917, was a figure on the Philadelphia literary scene.  She was known as “The Poet of the Pure Soul” and was also a contributor to numerous Catholic magazines and newspapers.  She edited the Augustinian magazine “Our Lady of Good Counsel” for a period and wrote over 85 books.  She was also sister to the infamous Ignatius Donnelly so her collection had at least the possibility of being filled with unusual treasures.   But this newly discovered bound volume upon closer examination proved to be in fact a manuscript containing signatures of Confederate prisoners of war held at the Johnson’s Island prison during the Civil War. 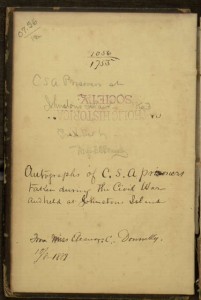 The first step was to describe the newly discovered work. A careful count finds that the manuscript itself consists of 62 leaves of unnumbered pages filled with not only signatures but also place and dates of capture and sometimes even other information.

After describing the album, I next reached out to other organizations to communicate the new find.  A short Google search provided the name of the heritage organization that documents and collects information about the prison:  the Johnson’s Island Preservation Society.  A little further digging found that they also have a page of documentation about the C.S.A. autograph books which have already been digitized and collected.

Next I reached out to them to let them know the url and the title of the work.  They were very excited – as can be imagined – about the discovery.   They immediately saw the benefit of cross-linking to our content and we asked for and received permission to link to theirs; thus we are digitally uniting two disparate physical collections into one linked set of resources that connects together the shards of history heretofore lost by the vagaries of time and place.

The final step is the creation of a detailed hand transcription of the document that will provide readers an easy way to view the text, and searchers a way to discover the names and other content from search engines and tools like Google and the library catalog.  Indeed we have started this process already as  one of our student transcribers has specifically requested to work on this item because she shares her home town with many of the captured Confederate soldiers whose names were written in this memorial almost 150 years ago.