March is Women’s History Month in the United States, so here are a few interesting titles on the topic. These titles are part of an exhibit on the first floor of the library, on display until the end of the month, and they are all available online through our Digital Library or the Internet Archive. 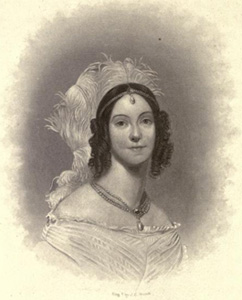 Angelica Van Buren, from "The Ladies of the White House."

The ladies of the White House; or, In the home of the presidents: being a complete history of the social and domestic lives of the presidents from Washington to the present time—1789-1881 by Laura C. Holloway (Philadelphia: Bradley & Co., 1881) provides one of the first collective biographies of the First Ladies of the United States. “Without the effective and intelligent aid they rendered,” Holloway writes in her introduction, “no administration would have been satisfactory; and though the political historian may ignore such service, the right-thinking, honorable men or women of this country have a higher appreciation of the services rendered by these ladies, who were the power behind the throne, equal in social influence to the throne itself, and a historical work bearing upon their lives is a valuable contribution to the nation’s official history.” This work was published in several editions; the 1881 edition includes the First Ladies from Martha Washington through Lucretia Rudolph Garfield. For more information about the history of the First Ladies of the United States, see this article on Wikipedia or this up-to-date list of brief biographies on the White House website.

For an interesting look at nineteenth-century domestic life, be sure to check out The complete home: an encyclopedia of domestic life and affairs … by Mrs. Julia McNair Wright (Philadelphia: J. C. McCurdy & Co., 1879). These tips and tricks are narrated by “Aunt Sophronia” to her three young nieces. Be sure to check out the illustrations! (The Internet Archive scans do not do them justice, so we have included our own scans of the illustrations in our Image Collection.) In the years following the U.S. Civil War, domestic bliss was seen as the nation’s saving grace after the loss of so many lives. In addition, women’s active role in the abolitionist movement came to an end with the passing of the 15th Amendment and women themselves became the topic of debate, with some parties arguing that women belonged in traditional domestic roles and others arguing that women should be allowed to participate more freely in non-traditional arenas. 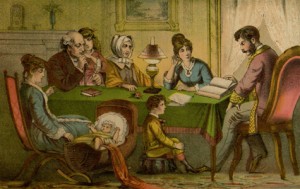 Modern Home, from "The Complete Home..."

Speaking of Bryn Mawr, another interesting book is A Book of Bryn Mawr stories edited by Margaretta Morris and Louise Buffum Congdon (Philadelphia: George W. Jacobs and Company, 1901). I am a 2005 alumna of Bryn Mawr College, so I couldn’t resist giving them a mention during Women’s History Month. Founded in 1885, Bryn Mawr College was not the first women’s college in the United States, but it was the first to offer undergraduate education on par with that of the top men’s colleges. The College sought to provide women with intellectual challenges and give them the opportunity to conduct original research, “a European-style program that was then available only at a few elite institutions for men.” It was also the first institute of higher education to grant graduate degrees (including doctorates) to women. In 1892, Bryn Mawr founded the first self-government association, granting its students the right to make and enforce the rules governing their conduct. From its inception, Bryn Mawr College strove to overcome the nineteenth-century notion that women were not the intellectual equals of men. This collection of “Bryn Mawr stories” marked the first truly introspective look at the College. Although fictional, the stories provide early glimpses of the unique characteristics of Bryn Mawr.

Interesting aspects of women’s history turn up in many areas of our Digital Library, so be sure to take a look around. In particular, check out the correspondence of the Sherman-Thackara families or the Barry-Hayes Papers for love letters and domestic matters, primarily from the 19th-century, or the Handbook for the Women’s Army Auxiliary Corps, Fort Des Moines, Iowa (1943).