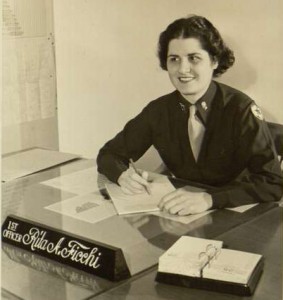 From Handbook for the Women's Army Auxillary Corps.

These books, from the 19th and 20th centuries, provide a variety of views of women’s history. The earliest work on display, The Ladies of the White House . . . by Laura Holloway, was published in Philadelphia in 1881, an updated edition of an earlier book. Holloway’s book, opened to a portrait of Angelica Van Buren, was written to honor the “services rendered by these ladies, who were the power behind the throne” (From the preface). This title is available online.

Another 19th century book, The Complete Home: An Encyclopedia of Domestic Life and Affairs… , also published in Philadelphia (1883), was written by Mrs. Julia McNair Wright as a guide directed to three young ladies. Extremely popular, it sold over 100,000 copies. This book displays a color scene depicting domestic life in the early 1800s, and it is available online .

The third 19th century book is Proceedings of the Twenty-fifth Annual Convention of the National American Woman Suffrage Association . . . 1893. Laura tells us that “The NAWSA was instrumental in winning the ratification of the 19th Amendment to the U.S. Constitution in 1920,” a noteworthy achievement.

The other three works in the exhibit all date from the 20th century: two from the early years, A Book of Bryn Mawr Stories (1901) and Famous Irishwomen (1907), and a 1943 Handbook for the Women’s Army Auxiliary Corps (WAAC), produced by the United States Army.

Founded in 1885, Bryn Mawr College “sought to provide women with intellectual challenges and give them the opportunity to conduct original research.” A Book of Bryn Mawr Stories is also online .

Famous Irishwomen, available in the circulating collection as well as Special Collections, was written to inspire other scholars to study the lives of noteworthy women in greater depth.

An entirely different work, the Handbook for the Women’s Army Auxiliary Corps, was written as a guide for the newly formed WAAC. Of special interest is the chapter on display: “VIII: This Business of Being Feminine.” How does this compare with the advice offered to today’s military women?

If you would like to read more of this book, see the online version.

Two cases, six books – a diverse sampling of women’s history! Come to Falvey Library’s first floor to see the exhibit before it closes at the end of March.