Her Semester Abroad: Ellie Thackara’s Jaunt in the Dominion of Canada

You may think you have nothing in common with Eleanor Mary Sherman Thackara, the 19th century daughter of the famed General Tecumseh Sherman on whom the Digital Library has many records, but let me ask you this: Have you gone abroad?  When I first sat down to read “A Summer Jaunt in the Dominion of Canada,” Ellie’s published accounts of her traveling in Canada, I admittedly worried I might not be able to relate to someone from such a different time and position.  But traveling has been the only time I have ever had the self-discipline to maintain a thorough journal.  So, while my day-to-day life will depend upon memories, my trips to Italy and Southeast Asia and my time on a small sailboat in the Caribbean are documented in well-weathered notebooks on my shelves.  Quite surprisingly, Ellie’s passages printed in The New York Ledger, like mine, regale the readers with asides about local history, imaginative descriptions of the landscapes, and many anecdotes of the interesting and unique people she meets along the way.  If you’re a student hoping to go abroad, a traveler with journals and memories of your own, or just a student of human nature read on!

In Ellie’s first installation she remembers remarking to a landlady that her “object in coming so far, aside from all the joy of beautiful scenery, was an interest in these foreign parts, their people, and their history.”   She proves this love for history by retelling tales of local importance for many of her destinations, whether it was the long-ago residence of a French martial city and convent or a famed Indian council attended by Champlain and Lescarbot in 1603.  Her satisfaction upon matching these facts to buildings and valleys is much like my own pride at recognizing a piece of history in front of my own eyes, and I don’t think Ellie and I are alone.

In an age where social networking allows us to share our traveling pictures with anyone and everyone, we might overlook Ellie’s attempts to put all of the beautiful sights she encounters into words.  Yes, she was prosperous enough to have several photographs taken and included in her accounts.  Despite this trailblazing technology, she further honors the uniqueness of each of her experiences by attempting to keep the scenery alive with her own pen.  From the decks of one boat, Ellie wrote, “The moon is a russet orange, from which the great bear must have had a bite, and long lines of clouds streak its face.  It is close upon our stern horizon, and before many moments will go down into the liquid darkness.”  Unable to snap a picture of every gorgeous sight she sees, Ellie includes many descriptive passages in her account to remind herself and share with others the landscapes one sees while traveling in Canada. 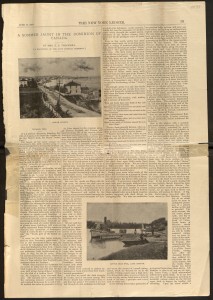 A look at several scenes Ellie came across.

It wouldn’t be a travel journal, at least it wouldn’t be like mine, without a cast of kooky characters that one meets along the way.  Ellie’s three pieces include tales of a guide who answered every question with his two-word vocabulary, “Yish, um,” and “Naw, um,” a Scotch-faced steward aboard one of her ships with an interesting “checkered double-visored cap” and lastly a “most artistic tramp” that she finds lying on a hillside as she disembarks from a boat.  Travelers everywhere meet those who wish to play a trick on tourists and this self-proclaimed blind man was such a person.  But after his farce was exposed and they knew they had been fooled, the newcomers begged for a photograph of the actor with his bald head and tattered garments “stuffed here and there with straw.”  As he knelt for them he dramatically exclaimed, “My name is George, G-O-R-G.  You are quite welcome.” 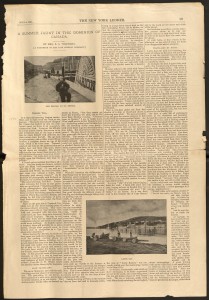 A look at the beggar George!

Not all of our travel memories are destined for publication or kept in the holdings of Villanova’s or any other university’s special collections, but it’s likely that they contain similar stories to those you’ll find if you read more of Eleanor Mary Sherman Thackara’s accounts.  After all, aren’t many of our reasons for traveling, whether for school or vacation or adventure, also the joy of beautiful scenery and an interest in foreign places and their people?  Read some more of Ellie’s accounts or explore the pictures in any of her three articles, all named A Summer Jaunt in the Dominion of Canada, found in the Sherman Thackara Collection of Villanova University’s Digital Library.