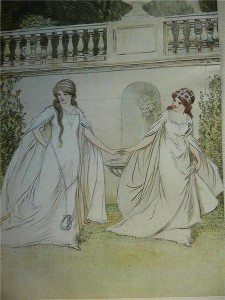 Within the large assortment of letters and photographs comprising the Digital Library’s Sherman-Thackara collection is an untitled draft of a play written by Eleanor Sherman Thackara (the daughter of Civil War general William Tecumseh Sherman).  It features four characters, each named after a heroine from one of Shakespeare’s plays: Rosalind (As You Like It), Desdemona (Othello), Katherine (Taming of the Shrew), and Viola (Twelfth Night).  They have been moved to nineteenth century New York and given prominent careers, but their dialogue frequently quotes actual lines from Shakespeare’s plays.  And they spend the time discussing romantic relationships—in short, a Shakespearian Sex in the City in the nineteenth century.

In terms of what American society was like at the time, Thackara’s imagination is quite radical.  First, the characters are not just housewives but have full-fledged careers, including a lawyer and stock broker.  Furthermore, the discussion the characters have comes out of Desdemona’s desire to divorce her husband—still a rare and scandalous event for the time.  Furthermore, she wants the divorce because her husband (Othello, of course) keeps losing large amounts of money through bad investments and refuses to help with the child-rearing.  Viola, on the other hand, takes great pride in having remained single, exclaiming, “What fools you women are to marry!”

The play ends with the women citing lines extolling the virtues of love, seeming to end on a happy note—though it is not clear Desdemona has agreed to call off the divorce (or even if the play is definitively finished).  The draft is hand-written, and there is no evidence the play was ever performed.  But written on the last page, Eleanor wrote a final, hopeful message, “May be.”