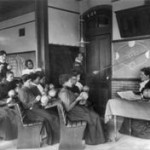 “Black History in Special Collections,” Falvey Memorial Library’s tribute to Black History Month, is on display in two cases near the first floor elevator. This compelling exhibit of six books from the 19th century provides a fascinating look into an earlier time in our nation’s history. Laura Bang, the Special and Digital Collections curatorial assistant, selected the texts and composed the explanatory placards.

The first book, Hampton and its Students, written in 1875 by two teachers at the Hampton Normal and Agricultural Institute in Hampton, Va., is opened to an illustration of “The Assembly Room.”  Note that in the Assembly Room, students are not separated by gender. Be sure to read the text in which the authors comment on the students’ “marked eagerness to learn.” 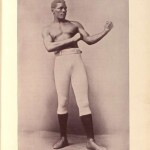 Founded after the Civil War, Hampton, now Hampton University, helped former slaves achieve self-sufficiency, and, in fact, developed “a system of industrial education that became the model for African American education in the post-Civil War era.” (Africana: The Encyclopedia of the African and African American Experience)

The central book in the same display case is a large volume, The Portrait Gallery of Pugilists of America and their Contemporaries, by Billy Edwards (himself a boxer), published in Philadelphia in 1894. Here we see an impressive photograph of Peter Jackson, an Australian boxer. Laura provides a brief biography of Jackson, known as the “Black Prince,” who had “a significant international career.” 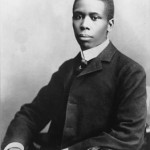 The third book in this display case, Poems of Cabin and Field, by Paul Laurence Dunbar (1872-1906), is illustrated with photographs by the Hampton Institute Camera Club. Dunbar was one of the most popular American poets of his time and one of the first African American poets to achieve national recognition.

The case also contains Uncle Remus, His Songs and His Sayings: the Folk-Lore of the Old Plantation, written by Joel Chandler Harris in 1881.  “Harris combined the stereotypical myth of the Old South with African American folktales and placed this complex and seemingly incongruous coupling into the language and demeanor of his storyteller Uncle Remus” (Encyclopedia of African American History, 1896 to the Present). Walt Disney used Uncle Remus as a source for his 1946 movie, “Song of the South.” This film, considered controversial for its depiction of African American characters, has never been released in its entirety on home video.

For further reading and context, check out the African American Studies Center (Oxford), through the library home page.