The Last Round of our Favorite Graphic Novels from the Stacks

There are only two days left until our Second Annual Graphic Novel Event, Superheroes and Scholars!  In anticipation of the event, we asked a few library staff members and students to tell us their favorite graphic novels.

Imagine if your life were like a video game. Sounds fun, right? But now imagine that the video game was really hard — like Battletoads hard — and it kept you from doing the things you wanted.

Such is the fate of Scott Pilgrim, the hero of the eponymous, six-volume graphic novel series created by Bryan Lee O’Malley. All Scott wants to do is date Ramona Flowers, the literal girl of his dreams (her favorite shortcut is the subspace highway travelling through his head). But in order to date her, he has to defeat her seven evil exes, in increasingly awesome and ridiculous video game-style boss fights that continually interrupt his life and his band.

The Scott Pilgrim series features a feast of in-jokes for gamers, comic book lovers, and Generation Y. But its greatness lies in what else is on every page: a poignant look at life and love in your early 20s. While Ramona and Scott’s exes may try to interrupt their story, the metatextual elements and metaphors never do. What results is the perfect balance between the frivolous, the hilarious, and the touching.

It goes without saying that you should never trust a writer. So when I was asked to pick my favorite graphic novel, I cheated. Miss Edwards took Scott Pilgrim (which is one of my favorites and a series, natch); as such, I felt it was my personal responsibility to push the envelope. She gets to write about six books. I’m writing about nine.

Those nine are the collected volumes of Preacher, which is the most delightfully loving and subversive work of Americana not created by actual Americans. It’s sharp, intelligent, violent, funny, absurd, revolting, heartfelt, outrageous, charming, and romantic. Where most books barely manage a third of those adjectives, Preacher earns every last one in spades. The story is, in essence, a modern western. Tragedy befalls a simple preacher; said preacher goes looking for the God responsible to give him what for. Not exactly the dialogue with God one expects, but it’s compelling reading.

Somewhere in between the beginning and the climactic finish, Preacher becomes much, much more than that simple description. Garth Ennis and Steve Dillon take Preacher far beyond the easy boundaries of the comic book and create a new, sprawling mythology for America – all the while, using the profane as a conduit for showing the truths of life. I’m laying it on a bit thick, but only because I love the book that much. And just when you think they’ve hit the full extent of their weirdness, they push things even farther. I’ll say nothing more on that, because I want you to experience it. And if you have, you know exactly what I mean.

While Preacher may be the last thing one expects from the medium that birthed Superman and Captain America, it’s something that I believe could only have been done justice in the graphic novel format. If it’d been a series of prose novels, it would’ve lacked the visual punch; were it a movie, it’d lack the depth. It’s a story that could only be told six panels at a time. And for that, I love it.

(Editor’s note: the Library has ordered Preacher and should have it on the shelves soon.) 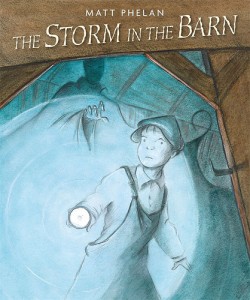 Jack Clark, the unassuming hero of Matt Phelan’s graphic novel The Storm in the Barn, has a face off with one of Mother Nature’s superpowers, rain. Jack and his family live in Kansas in 1937 and struggle to survive the effects of living in the Dust Bowl. While the town mourns the loss of rain, of crops, and of family members who succumb to dust dementia, Jack has to decide if it is just that dementia that causes him to see a bright light and hear loud rumble emanating from the neighbors’ barn. Although he suffers from a lack of self confidence, Jack summons the courage to enter the barn and strip the rain of its self-appointed power, thereby saving the town.

Phelan’s story is drawn out in soft, wind-swept images that give the reader a sense of standing in the midst of swirling sand. A debut graphic novel, Phelan’s book was the winner of the 2010 Scott O’Dell Award and was an ALA notable children’s book selection. Phelan was one of four panelists at Falvey’s First Annual Graphic Novel Event and is the illustrator of several other children’s books. Don’t pass up the chance to get to know Phelan’s work. He’s a rising star.

Don’t forget to chime in!  Tell us your favorite graphic novels or comics in the comments, or on Twitter and Facebook.  Your recommendations could end up on our shelves.